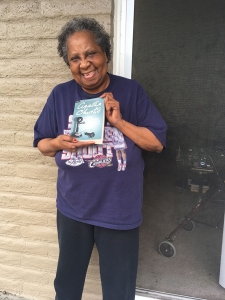 Yvonne was born and raised in Columbus, Ohio.  She visited Omaha as a young girl and fell in love with the city.  When she graduated high school, Yvonne moved to Omaha and started working as a dispatcher for the Omaha Police Department.  Being away from her two younger sisters was hard for Yvonne.  She moved back to Columbus for a few years, but eventually decided Omaha was her home and returned to Nebraska.

In 2010, Yvonne was diagnosed with kidney failure and started dialysis three days a week. In 2015, she underwent a six-hour back surgery, leaving her to recovery in a nursing home.  A year later, Yvonne went to a doctor’s appointment hoping to receive good news about scheduling a kidney transplant, but was rushed to the emergency room for quadruple bypass surgery, recovering again in a nursing home. Because of the surgery, Yvonne is unable to receive a kidney transplant and continues to receive dialysis three days a week.  The last few years have been tough, but Yvonne knew if she kept a positive attitude she would eventually feel better and get to see her family again.  She spent 2016 focusing on her health to be able to travel to see her sisters. 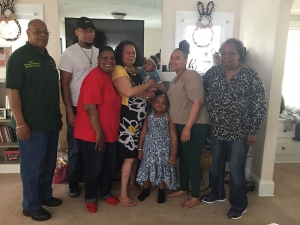 The last time Yvonne saw her family and friends was three years ago at her mother’s funeral in Columbus.  Dreamweaver Foundation wanted to send Yvonne to Ohio to spend Easter with her family.  Yvonne was sent off in style being transported to the airport by VIP Limo.  Once in Ohio, Yvonne spent two weeks making dinners, shopping with her sisters and getting on each other’s nerves like siblings do!  There aren’t many times that the entire family gets together, Yvonne’s sister even set up family photographs.

When Yvonne landed in Omaha, she was welcomed back to Nebraska by a Dreamweaver volunteer.  Yvonne said, “I love my family and enjoyed our time together, this trip made my year, but after two weeks, it was time to get home!”

Dreamweaver Foundation would like to our community partners VIP Limo and Columbus Transport for escorting Yvonne to her destinations and DaVita Dialysis for treating Yvonne during her trip.