“I have always been amazed and inspired by my Dad’s positive outlook on life.  He is the most loving and giving person I have ever known – always there to help in the time of need.  Like a lot of others, my Dad is so giving but thinks of himself last!” were the words written about our next “Dreamer”, Willard (Will) Hailey by his daughter, Sonia.

Will has congestive heart failure and has had to go through three quadruple heart by-pass surgeries.  Will served in the Air Force in the Korean War and was an airplane machinist.  He later worked for a company in Omaha, but was let go after injuring his back.  The next day, Will suffered his first heart attack.  He was only 50 years old. 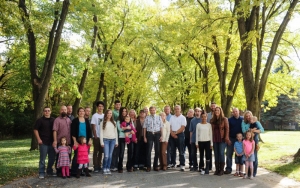 Not only did Will and his wife raise eight children, they also helped with raising grandchildren as well as taking care of one of the children for eight years after he suffered a brain injury.

Will had several “Dreams” that he thought would be great.  The “Dream” that was fulfilled was simple, however very meaningful to him and his family.  His desire was to get his children, grandchildren and great-grandchildren together for a family picture and picnic.

When I arrived at Will’s home to accompany the family for the day, I noticed Will coming out of his home with his always-welcoming smile, accented by his perfectly manicured and waxed handle-bar mustache.  Will looked as dapper as ever . . . ready to begin his “Dream.”

As Will and his family gathered, a limo bus pulled into the neighborhood to whisk them off to St. Columban Father’s Center in Bellevue, NE for a day of family and fun.  Nearly 30 of Will’s family were in attendance for the day.  With the trees’ foliage on campus beginning to change, the Hailey’s had a beautiful backdrop for their family pictures.   After many laughs, poses and pictures, it was time to gather for a picnic lunch in the center of the campus.  From the very young to those that were a bit older, all enjoyed their time together and now would anxiously await for their family photos to be delivered.

We would like to especially thank Janine McClintock from Janine McClintock Studios for making Will and his family’s day so special and easy.  Your smile behind the camera made the family feel at ease and made it easy for them to smile back at you.  Thank you!

Will, thank you for making all of our day’s brighter with your warmth, attitude and hugs!  You are a true gentleman!  It is said that a truly rich man is one whose children run into his arms when his hands are empty . . . Will is truly one of the richest men I know!