Tony has two loves; his wife, Helen, of 72 almost 73 years and playing trumpet.

Tony was born and raised in Omaha. His parents moved from the Czechoslovakia region between 1915 and 1917. They chose Omaha because family already lived in the area. Tony attended a Bohemian elementary school in Omaha. Marty, Tony’s son, believes he may be the only person in Omaha that can read, write and speak in Czech. In high school, Tony started playing the trumpet. He remembers his first trumpet costing $37! Tony played with two Polka Bands before joining the Vern Luddington band in the 1960s or early 1970s. Luddington took the band all over the world! Tony remembers Luddington would pay for their travel expenses and sometimes their spouses. He loved traveling and playing all around Europe. But, it was always nice to come back home to play for an Omaha audience. 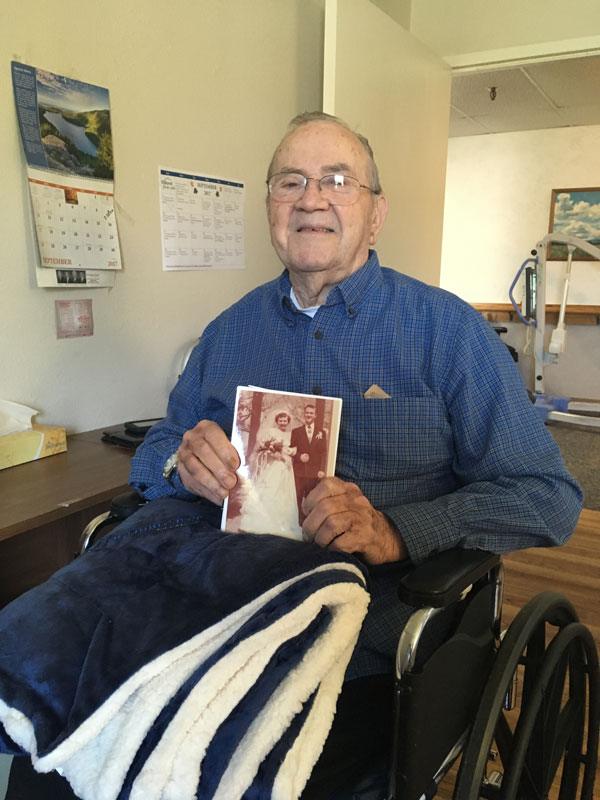 Along with playing Polka, Tony loved to Polka dance. At one of the dances, he met a girl. A couple days after, he went to pick her up for a date – that’s when he realized she lied about her age and she was too young for him! So, he took her older sister, Helen, out on a date. Now, Tony and Helen have been married for 72 years with two children, Marty of Omaha and Sharon of Cleveland, four grandchildren and four great grandchildren! Helen reminisces about the 55 years Tony played trumpet and 47 New Year’s Eve dances.

The last few years have been tough for Tony and Helen. Due to different health needs, they are living in separate nursing facilities. Colleen, Chaplin and Hillcrest, was visiting Tony when he told her, he and Helen haven’t been on a date in 15 years. She contacted Dreamweaver Foundation to nominate Tony to fulfill his Dream of a last first date.

It just so happened that Sharon was going to be in town from Cleveland. We asked Tony if it was ok if we invited his children on his date with Helen. He was delighted! On a Monday afternoon, VIP Limo escorted Tony and Helen on their date to Anthony’s Steakhouse. In first date fashion, Tony presented Helen with a bouquet of flowers. Tony and Helen were joined at Anthony’s Steakhouse with their family. Marty said, “this will be something that my sister and I will always remember and be thankful for. It was an opportunity to be with our Parents, outside of their Care Facilities, and have a nice evening together. We were able to take some photos of all of us, and we have shared them with our extended family in other States. Again, thank you for a wonderful evening!”