Almost 7 years to the day, Steven was in the same place with the exact same people! Facebook kindly reminded Melissa, Steven’s daughter, she took her father and two sons to the zoo 7 years ago…just 1 day after Steven fulfilled his dream of returning to the zoo with his daughter and grandsons. The Omaha’s Henry Doorly Zoo holds special memories for Steven. 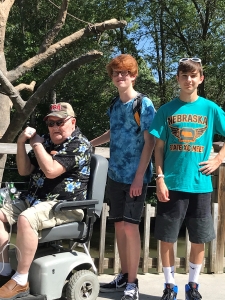 Steven dedicated 30 years to Baker’s Grocery Store as the receiving manager before retiring. But, he didn’t slow down when he retired, he took care of his father for ten years. In his free time, he was able to pick up a few hobbies. Over the years, he mastered the art of burning wood and created hundreds of beautiful pieces. For a short time, he took his craftsman work in another direction as a taxidermist.

Recently, Steven’s COPD has been worsening. Steven was talking with his Hillcrest Hospice Social Worker, Amy, about his happiest memories. That’s when it all started. With help from Omaha Zoo Foundation, Hillcrest and VIP Limo, Dreamweaver Foundation fulfilled Steven’s Dream.

Steven arrived in style with VIP Limo escorting him from Greta to the second best zoo in the nation, Omaha’s Henry Doorly Zoo. Melissa, his grandsons, Hillcrest Caring Companion caregiver and Ashley, Dreamweaver Dream Coordinator, greeted Steven as he arrived. Little did Steven know a surprise was waiting for him. Omaha Zoo Foundation arranged for top-secret experience, so secret I can’t even write about it! But, I can tell you, he was surprised and so excited. Steven had never experienced anything like this before!

For the rest of the afternoon, Steven and family strolled around the zoo reminiscing about past visits and in awe of how much the zoo has changed and expanded. Melissa told Dreamweaver Foundation, “Thank you for everything. This was a happy day for him, myself and his grandsons.”