Stanley is a man who values his privacy and loves nature.  Behind a 6-foot fence and curtain of pine trees, Stanley’s backyard has always been his oasis.  His old porch swing was his favorite perch for birdwatching and for having his morning coffee, and the act of maintaining his landscaping was a favorite pastime and a source of pride.

Since Stanley’s cancer diagnosis in 2019, he hasn’t had the energy to work on his yard like he used to, and his backyard 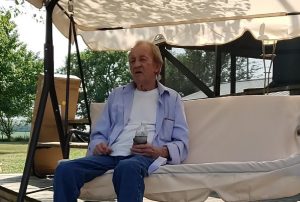 paradise has suffered because of it.  Stanley’s devoted daughter, Melinda, noticed that the dilapidated state of the yard was weighing on Stanley—the weather had rusted out his favorite swing, the weeds and downed branches had become a tripping hazard, and the broken fence had become a source of stress.  When Stanley told Melinda that he was too embarrassed to host his annual Fourth of July backyard picnic, Melinda knew it was time to take action to reclaim her dad’s backyard paradise.

Melinda coordinated an army of family and friends to gather for a “yard clean up party”.  The group had big work ahead of them—replacing the fence, weeding, picking up branches, and bringing the backyard back to the level that met Stanley’s high standards.  Because Stanley is so loved, Melinda had no trouble getting a big group together to help her dad!  Feeding this hungry group of volunteers, however, was a different story—and Melinda reached out to see if Dreamweaver could help make the clean up effort a party by providing her dad’s favorite foods—Steaks and Fairbury hotdogs!

Dreamweaver was happy to sponsor the food for this event.  Stanley held court at the picnic table as his family and friends followed his orders to chop/pull weeds, clear away branches and beautify his yard. At the end of the day, after the dust had settled, Stanley’s backyard was back to the way he liked it—neat and behind a fence!  Dreamweaver Foundation also replaced Stanley’s old, rusted swing with a shiny new one, so that he will have the best seat in the house to watch the birds, and to reminisce about the day when his loved ones came together to restore his sense of peace and happiness.