For many, going back to their roots is a dream. Sherry has been an Iowan most of her life. But, always cheering for the Huskers! Her childhood was spent in Marshalltown, Iowa, but moved in her early teens when her dad’s job was transferred to Council Bluffs. Sherry dropped out of Thomas Jefferson High School as a junior when her mom passed away. She started working at Playland Park, which is now Tom Hanafan River’s Edge Park to help provide for her dad and sister. She took pride in making a fanfare favorite, snow cones. She has many happy memories from her time at Playland Park. 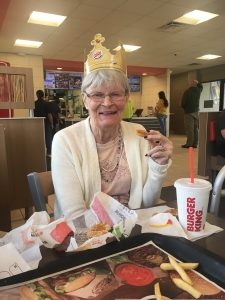 Colleen, Hillcrest Health Services Chaplin, often visits Sherry. Sherry has dementia and has resided at Hillcrest Shadow Lake for at least six years. In fact, she has been there longer than most of the staff, she’s like family to many. When Colleen nominated Sherry to fulfill a dream, her initial idea was to attend a Husker game in Memorial Stadium. But, Sherry had been there, done that! Her father fulfilled her dream of attending a Husker game when she was just a young girl. She cherishes memories from that game and has never had a desire to go back. She laughs as she remembers commentator Lyle Bremser and recites his famous line, “Man, women and child!”

Sherry expressed her wish to visit her home at 515 S 28th St and several other of her favorite spots in Council Bluffs. Sherry understood many of these places, including her home, may not be there, but she still wanted to tour the area.

A couple days before her big day, Dreamweaver Foundation treated Sherry to a shopping adventure at Von Maur. Evelyn, Von Maur Representative and Hillcrest Care Hospice Volunteer helped Sherry pick out the most gorgeous emerald green outfit with a necklace to match.

It was a beautiful, fall Iowa day, perfect day for a stroll. Sherry would be touring Council Bluffs in style, in a VIP Limo! She hopped in with Colleen and Baylor, UNO Social Work student and headed east. Before going to Sherry’s old stomping grounds, the ladies stopped at Burger King to meet Dreamweaver Foundation Dream Coordinator, Ashley, and to enjoy Sherry’s favorite, Burger King onion rings.

After a delicious Whooper meal and a belly full of onion rings, VIP Limo escorted the group around Council Bluffs. She couldn’t believe how much the town has changed. It was hard to believe her home and many of her favorite spots like Crystal Pool, Hinky Dinky and 29th St Bar were gone, taken over by rows of homes, a strip mall or office buildings. Edison Elementary School and Thomas Jefferson School are still in operation, but much bigger than when she attend in the 40s and early 50s.

It was a great day, reminiscing about her old shenanigans.