Ruth won a beauty pageant at a Ringling Brothers Circus in the early 50s in Evensville, Indiana. After she was crowned, she modeled for 20 years or so.  She spent most of her time in New York, but loved visiting Puerto Rico in the summer. 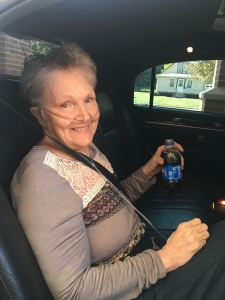 She was modeling in Chicago when she started to have complications with her pregnancy.  Her sister, Della, came to Chicago to take care of her.  The baby was ok, but Ruth needed to stay in Chicago to recover after the birth.  Della was living in Omaha at the time because her husband was station at AFB.  After recovering for a few months Ruth came to Omaha.  She noticed there weren’t bars on the windows, and thought this would be a nice place to raise a child.  So, that’s what she did! She and her husband raised their son, Joseph, in Omaha.

While her son was young, she did whatever she needed to do to provide for him.  She often worked with Della; helping teach nursing classes or taking care of the elderly.  She looked up to her big sister.

Ruth recently moved into Florence Home.  April, Director of Social Services, wanted to do something special for Ruth.  She contacted Dreamweaver Foundation to help make this happen.

Ruth has always loved Italian food, especially the Olive Garden.  Joseph now of New York said, whenever he visits, Ruth always requests the Olive Garden for lunch or dinner.  We worked with the Olive Garden to set-up a lovely dinner for Ruth, Della and Jack, Della’s husband.  To prepare for this special night, we took Ruth shopping at Von Maur to pick-out a beautiful, new outfit.  With help from Evelyn, Ruth choose a beautiful navy blue pant and jacket.  She was escorted to Von Maur in a limo from VIP Limo. She asked if Champagne would be in the limo, something even better was waiting for her, PEPSI, her favorite!

When the big night arrived, Della and Jack meet Ruth at Florence Home to be escorted to the Olive Garden by VIP Limo. The three enjoyed pasta entrees, dessert and after-dessert coffee. Ruth was enjoying being with her sister outside of Florence Home she lost track of time.  They had spent almost three hours talking and reminiscing.  As they were getting into the limo, a surprise was waiting – Leah, Ruth’s Social Worker, and Cecelia, Ruth’s Musical Therapist, from Kindred Hospice.  Cecelia entertained Ruth with her favorite songs on the guitar.  Ruth sang along and drummed her hands on her lap.

Della and Jack graciously gave Dreamweaver a donation.  They wrote, “your group has helped her perk up and give her hope”.

Dreamweaver would like to thank everyone who made Ruth’s Dream possible: Florence Home, Von Maur, VIP Limo, Olive Garden, Kindred Hospice and Della and Jack.