Russell (Russ) Verhousky played in the NFL when “iron men” ruled the field. But the toughness he displayed on the field belied a sensitive heart that guided him through a career as a teacher. 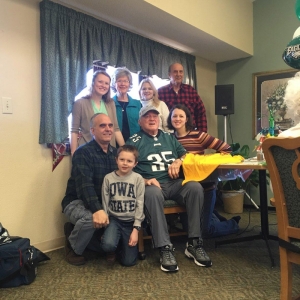 Before playing for the Philadelphia Eagles, Russ attended Bloomsburg State Teachers College in Bloomsburg, Pennsylvania and helped his team to a 28-4-1 record in his four years. Russ was known as an “Iron Man,” a two-way player that played offense and defense and rarely left the field. He was enshrined into the Bloomsburg Hall of Fame in 1999 for his achievements in football.

After college, Russ signed as a free agent with the Philadelphia Eagles in March 1953 and played on a team that featured future Hall of Fame player Chuck Bednarik and finished the season with a 7-4-1 record.

After his time with the Eagles, Russ moved to California and worked in a school setting as a speech therapist. He met his wife, Bonnie, a P.E. teacher, while they both were teaching at Benjamin Franklin High School in San Francisco, California. Russell and Bonnie were avid golfers and tennis players; the couple recently celebrated their 62nd wedding anniversary. 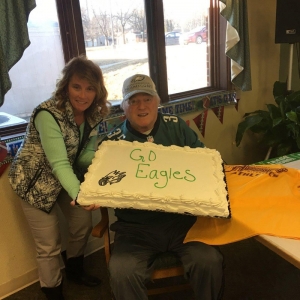 Russell loves reminiscing about his days playing for the Eagles. Now nearing the end of his life, his Dream was to reconnect with the team. And the Eagles appearance in Super Bowl LII provided the perfect opportunity.

On Super Bowl Sunday, Dreamweaver hosted a Super Bowl party to cheer on the Philadelphia Eagles and celebrate Russell’s upcoming 90th birthday. The aroma of Casey’s pizza and football themed decorations filled the dining hall as residents filtered in to start the celebration. The local newspaper, Times Citizen, and news station, KWWL were in place and ready to catch the excitement. On behalf of Philadelphia Eagles, Bloomsburg University and Dreamweaver Foundation Ashley, Dream Coordinator, presented Russ with an Eagles signed hat, special letters from Eagles and Bloomsburg University, a memory book highlighting this athletic accomplishments and finally Russ’ #35 Philadelphia Eagles jersey! 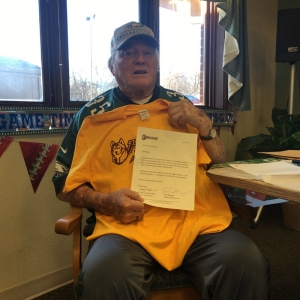 He was thrilled to wear the green, black and silver again! He enjoyed the rest of the evening alongside his wife and family cheering the Eagles to a 44-33 Super Bowl victory over the Patriots!

This Dream would not be possible without our many partners, Heritage Care Center, Vetter Health Services, Philadelphia Eagles and Bloomsburg University. Thank YOU!