It’s not hard to fly under the radar and blend into the crowd when you are quiet and easy going. Thanks to his pleasant and humble nature, Rodney doesn’t demand a lot of attention from the wonderful staff at Azria Health Central City.  However, Rodney’s hospice social worker, Kristen, noticed how his face lit up and his toe tapped whenever country music was on the radio.  And she called on Dreamweaver Foundation for their help to give Rodney a chance to enjoy some special attention, front and center, at a country music concert. 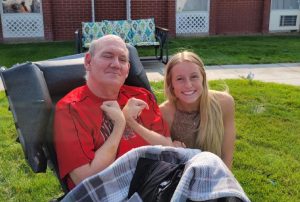 Dreamweaver Foundation would like to thank Kristen from AseraCare Hospice for noticing Rodney’s tapping toe and nominating him for a Dream; Amy from Azria Health Central City for her help with hosting this concert; and McKenzie JaLynn for sharing her gift of music with this Dreamer!