Roberto has always loved two things in his life: family and baseball! 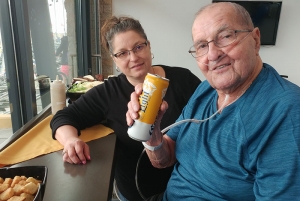 Roberto was born in Havana, Cuba in 1929.  His dad was a business owner and taught him the skills of entrepreneurship and owning a business.  Roberto started working in a butcher’s shop when he was 14 years old.  Baseball was a major part of his life growing up.  Watching baseball, talking about the games, and playing pick-up games created a special bond between his father and brothers.

Roberto was at one of his businesses when he kept noticing this beautiful girl walking down the street. One day he got the courage to speak to her.  They fell in love, married and had two boys and one girl.  Roberto risked his life fighting against Communism. In 1966, Roberto filed paperwork to leave Cuba in fear of raising kids in a communist society. They always believed that one day they would move back to Cuba.  In Cuba, Evelyn, daughter, recalls her father being put into a hole twice with no food or water for days.   But, for five years was forced to work day and night in the sugarcane fields.  In late October of 1971, they came to get him and his family. They didn’t know what was going to happen or where they were going.  They arrived in Omaha on November 1 during a snowstorm.  They had never seen snow and were frightened of the weather; Roberto and his wife thought they made a mistake.  Roberto started working a meat packing plants. He worked seven days a week to support this family.  When he took time off, he always spent that time with his family: fishing, playing dominos or his favorite watching baseball and taking about previous games.  Roberto and his wife believed they would move back to Cuba, but stayed in Omaha to raise their family. 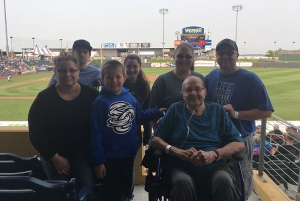 For the last few years, Roberto has been in and out of the hospital.  He still comes alive and opens up when he is watching baseball.  Roberto recently lost his wife.  Amy from AseraCare wanted to give Roberto something to look forward to and a memorable experience he could share with his family, she knew just who to contact to make that happen.  Roberto and his family celebrated his 88th birthday no better way than at the Omaha Storm Chasers Game at Werner Park.  He enjoyed a Storm Chasers win, eating stadium delicacies, even drinking a beer and eating birthday cake.  It was his day to enjoy!

Evelyn told us, “We hit it out of the park! Thank you again for an amazing day – dad is still talking about it and he loves, loves his shirt and hat and he put his baseball by his sitting chair to look at everyday.”

Dreamweaver Foundation would like to thank the Omaha Storm Chasers for helping us celebrate Roberto’s 88th birthday!