Traditions. Every family has them! Every summer for nearly 8 years, Richard took his two daughters to Worlds of Fun for a little get-a-way. It was his chance to spend undivided time with his girls. As life happens kids grow older, summers get busier and vacations seem to be a distant memory.

The last few years Richard has lived his retirement to the fullest in Florida. Enjoying soaking up the sun and surfing the waves of the Atlantic Ocean. Hurricane Irma hit in August of 2017 destroying everything in her path, including Richard’s home. He took this as a sign to move back to Nebraska to be near his daughters and four grandchildren. Later that same year, he was diagnosed with lung cancer. 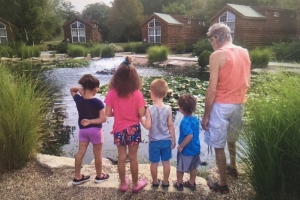 Richard was telling Karen from Tabitha Hospice about his tradition of taking his girls to Worlds and Oceans of Fun and his hope that they will continue the tradition with their children. Karen had an idea, she asked Dreamweaver Foundation for help to make Richard’s dream come true. A few short weeks later, Richard, his two daughters, four grandchildren, and two sons-in-law were off to Worlds of Fun to make more memories and continue the tradition!

They stayed in the new Worlds of Fun Village cabins…just walking distance from the park entrance. He spent the weekend reliving memories with his daughters and creating new memories with his grandkids. Of course, Camp Snoopy was a favorite with the younger kids! Traveling all the way to Kansas City, he couldn’t leave without having supper at Gates Bar-B-Q, his most favorite BBQ ever!

Richard expressed his sincerest gratitude and appreciation for the fulfillment of his dream. He hopes this is the start of a new family summer tradition for his daughters and grandkids.

Thank you Worlds of Fun for partnering with Dreamweaver to fulfill Richard’s Dream.