As families get larger, they tend to start their own traditions. It’s been nearly three years since Reba has had her entire family together; 4 kids, 12 grandchildren, and 8 great-grandchildren. Reba loves when everyone gets together, that’s when she gets to celebrate her legacy. 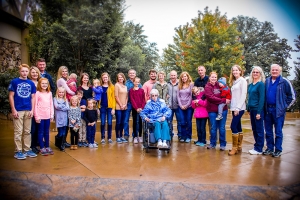 For Reba’s entire life, she was a talented seamstress. She made all her daughter’s prom dresses and blankets for all the grandchildren and great-grandchildren. Monica, Hillcrest Hospice social worker, nominated Reba to tour UNL’s International Quilt Study Center & Museum, but after chatting with Reba she realized her dream was to have her family together.

Growing up and raising her family mostly in the Norfolk area, they didn’t venture to Omaha very often. Having a family day at the Omaha’s Henry Doorly Zoo was going to be very special. She was excited to see animals she has never seen before, but really most excited to have her entire family together again.

It was a rainy September day, but that wasn’t going to stop her from enjoying her time with her loved ones. As she arrived, she was greeted by her whole family; about 30 people! Before touring the zoo, she enjoyed a delicious BBQ lunch, followed by family photos in the Desert Dome.

Next, Reba and her family explored all the exhibits and attractions throughout the zoo. Lions, tigers, and bears they saw it all! Reba especially enjoyed the giraffes and monkeys.

Reba was thrilled to have everyone together; she even wore herself out! It was a very special day.