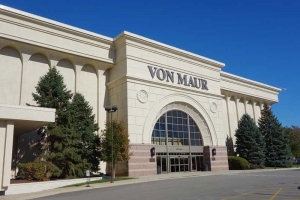 On a crisp, sunny Monday in November four ladies met at Von Maur to do a little shopping.  This shopping trip was different than other shopping trips the ladies had been on, you see three of the ladies were making a new friend and helping to create a dream for Peggy.  It had been a long time since Peggy had been out with girlfriends to go shopping for herself.  For the last several years Peggy’s outings were generally to doctor appointments, chemo treatments, ER visits and when she felt up to it, church on Sunday morning.  Peggy has metastatic melanoma, a form of cancer.  Her treatments and overall health leave her feeling exhausted, unable to walk without pain and pretty much isolated to her apartment.

When I first met Peggy and told her that The Dreamweaver Foundation would like to provide her with a dream she couldn’t think of a thing she would want.  She told me that she felt blessed, and that she was grateful to be alive.  I shared some of the previous dreams others had received and planted seeds of things I thought Peggy might enjoy based on our conversation.  I asked Peggy to think about what she might like for a dream and told her I would call her in a week.

I truly expected Peggy to look over some of the dreams, talk to her boyfriend/caregiver and come up with a terrific idea of what she would like to have as her dream.  That was not the case, on my follow up call with Peggy she told me she had thought about it and truthfully, the only thing she really wanted was a new pair of shoes.  Her cancer had caused her legs and feet to be so swollen that none of her shoes  fit and she spent most of her days barefoot and wore flip flops when she had to go out.  November in the Midwest is not flip flop weather!  We had snow on the ground, freezing temperatures and here was a woman with serious health problems and no decent shoes. 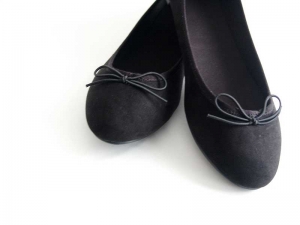 The band of Dreamweaver volunteers set out on that Monday to help Peggy find a comfortable pair of shoes.  The clerk at Von Maur was tremendous, bringing out pair after pair – that didn’t fit.  All shapes, and sizes, but her poor feet were so distorted he was struggling yet never once did he make it about her.  His comments were things like, that style runs small or the cut of those is a little high for your instep. He was so kind and so respectful of Peggy and her condition.  Finally, she found the shoes!  Peggy paraded up and down the aisle smiling from ear to ear, twisting and turning in front of the mirror to see her feet finally placed in an adorable pair of black slip ons.

The Dreamweaver volunteers had other plans for Peggy’s shopping trip, and when she left Von Maur she had a fun new outfit, a winter jacket, several pair of socks, slippers with a hard sole and yes, her requested pair of shoes that fit her feet.