Family is Paul’s most prized possession.

Paul grew up as a middle child in Southern California with nine brothers and sisters. His parents instilled in all of their children the value of family. Now as an adult Paul is passing down the importance of kinship to his three children, 10 grand kids and two great-grandchildren. 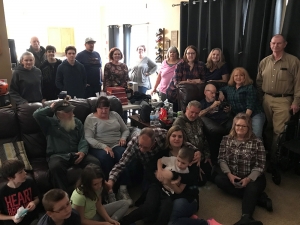 Paul and wife, Cyndy, met while growing up in Southern California. They raised their three kids on the sunny beaches of The Golden State. As kids do, they get older, get married, start their own families, and sometimes move away. This was no different for Paul’s family. His daughters married devoted Military soldiers that were relocated from California. Paul and Cyndy didn’t think twice about leaving their home and siblings in California to follow their kids and grandchildren. Scottsdale, Colorado Springs, and El Paso quickly became home before settling in Omaha for the last 2 ½ years. They feel blessed to have landed in Omaha because of the exceptional health care. Paul was diagnosed in 2015 with Myelodysplastic Syndrome (MDS), that has now progressed into Leukemia.

Over the last few years, Paul has been unable to travel. He dreams of reminiscing with his siblings in the warm California sun and visiting his daughter and three grandsons in North Carolina. As he thought about, it’s been three years since he has seen his grand kids…FaceTime hugs just aren’t the same as being physically together. When Dr. Teply, Paul’s physician at UNMC, learned of his dream to have the entire family together again – three kids, 10 grandchildren, two great-grand kids, plus his nine siblings – she knew Dreamweaver Foundation could make the reunion happen.

On a cold February day, his daughter and grandsons arrived from North Carolina, along with many of his siblings. For four days, the family was inseparable; sledding in inches of snow, getting tattoos in honor of their father and father-in-law, watching Hallmark movies, playing cards, and cooking their favorite dishes. An afternoon at The Mark, a bowling alley and family fun recreational center, was scheduled but Mother Nature had other plans…a blizzard along with a day of rain wreaked havoc on these plans, but that didn’t damper any spirits…it just meant they had more uninterrupted time together at home.

Thank you to Zach Wiegert and Goldenrod Companies, LLC, Dr. Teply from UNMC, The Mark, and Travel and Transport for partnering with Dreamweaver Foundation to fulfill Paul’s Dream.