Cars have been in Pat’s family for generations.  Her brothers always enjoyed tinkering around in the garage, using their mechanic skills to rebuild cars for stock car drivers, eventually taking their passion for cars into the driver’s seat.  As Pat’s brothers found success, her love for racing grew.  She will tell you, “car racing is in my blood.” 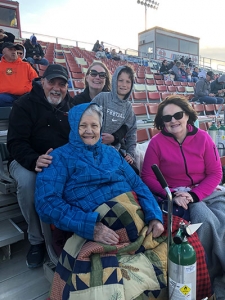 Pat’s love for racing didn’t fall far from the tree; she shared her love for stock car racing with her six kids.  Her sons, Randy and Ronnie caught the racing bug and found success.  This mama loved being in the stands cheering for her sons.  I-80 Speedway, Eagle, The Little Sunset; she followed her sons to all the races, never missing a single competition.

After watching her brothers and sons race for many, many years, Pat decided it was her time to jump in the driver’s seat.  Twenty-five years ago, she raced in the Powder Puff races for three years in a row and took her own victory lap in 1997.

A COPD diagnosis struck Pat in 2000, causing her to slow down little by little.  The last three years have been tough, causing Pat to be sidelined from attending any races…that is until this weekend! Pat expressed her dream to attend her son’s race at I-80 Speedway to Molly, Social Worker at Brookestone Meadows.  Getting Pat to the track was going to take teamwork and a bit of planning, that’s when Molly enlisted Dreamweaver Foundation’s help.

Pat could hardly sleep the night before the race she was so excited.  Probably for the first time ever, a limo showed up at I-80 Speedway just outside of Greenwood, NE.  Out came Pat, Kacie her nurse from Brookestone and several family members.

It was a chilly April evening, but nothing was going to stop Pat from enjoying “the best driver in her book.”  As she entered the race track grandstand, it felt like home; being surrounded by her kids, family and familiar faces.

Randy won two out of his three races!  He would have won the third, if another driver hadn’t wrecked into him, Pat shares with frustration.  But, that’s racing…some you win and some you lose.  Pat’s experience at I-80 Speedway on Friday night was more than she could have ever dreamed of…from the transportation to her team of helpful hands surrounding her.