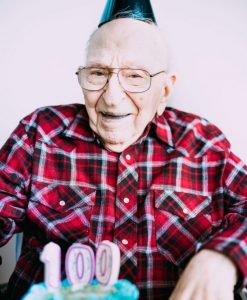 While most of us would consider living to see a 100th birthday as quite a feat, if you asked Norman about his upcoming birthday, he would have nonchalantly told you that it would be just another day—and that he had lived a lot of them.  Norma grew up and worked on family’s dairy farm, and eventually started his own home building business in Kearney, “Norm’s custom homes”.  “Hard-working” falls short in describing Norman’s unstoppable energy and determination.  In fact, Norman’s family tells us that they had never seen Norman sit down until he was half-way through his 90’s!   With his nose always to the grindstone, Norman never made any time for entertainment, but getting together with his family for dinners on Sunday was always the highlight of his week, as he found a chance to relax and enjoy the people, he loved the most.   Norman’s family and the wonderful staff at Brookestone Meadows knew that gathering with family and old friends to celebrate his 100th birthday would surely warm his heart and bring a smile to Norman’s face.

Originally, the family had planned to gather at Brookestone Meadows to celebrate his birthday, but because of the sheer number of people who know and love Norman, the guest list soon grew too large for the space!   Monika, Brookestone Meadows’ Life Enrichement Coordinator nominated Norman to receive a Dream, because she knew that we could help make Norman’s BIG party extra special!   The family settled on hosting the party at The Good Life Lounge—a perfectly named venue to Nebraska’s newest centenarian.

Dreamweaver board members and volunteers set the stage by decorating the space for Norman’s party.  Upon arrival, guests were greeted by a 6-foot banner with Norman’s smiling face and a chance to offer their well-wishes in a cow-hide print guest book.  Many members of the family had not seen one another in over two years because of distance and the pandemic, so hugs were flying!  Brookestone Meadows staff were tickled to see how being around his family brought out another side of Norman—a sweeter, sentimental side.  He greeted his granddaughters by kissing their hands and teared up watching his young great-grandkids play with the cow figurines that decorated the tabletops.  Norman was so moved with excitement, that he kicked off his wheelchair’s footrests so that he could propel himself freely around the room, stopping to talk to everyone he saw.  He even gave fist bumps and high-fives to the March Madness basketball fans who occupied the other side of the bar.  To everyone’s surprise, “No-Nonsense Norman” gave in and wore a blue party hat throughout the celebration—posing for pictures with his cake, and held court front and center for a monumental family picture that featured five generations of smiling party guests.

If you ask Norman now, about his 100th birthday he will tell you it was a big deal and very special for all the people he loves to be together in on room to celebrate.  The 6-foot banner that hung at his party, now hangs in his room as a reminder of the day—and though he finally took the party hat off, he is still wearing that big smile.

Dreamweaver Foundation would like to thank Brookestone Meadows for introducing us to Norman through the nomination process, our amazing volunteers for setting up and welcoming guests to the party, Hy-Vee for providing the cake, The Good Life Lounge’s hard-working staff for providing the perfect food and atmosphere for Norman’s big day, and to Amber Lih’s Photography for working her camera magic to capture the magic in the room!