In Millie’s cousin Ruth’s words . . . “Millie is a wonderful Christian woman who has led a somewhat hard life.  Millie has always been hard working, honest, generous and ever willing to help others.  After a difficult divorce from her husband of 20 years, Millie became a single parent to 4 of her 5 children.  Although she received support from her ex-husband, the challenges of being a single parent were difficult.”  Ruth went on to tell us that, “Most of her work life had been spent as a housekeeper making it difficult to have any extra money for luxuries.”

Millie’s life was shattered in 1994 when her son, Greg, passed away leaving her completely devastated and lost.  However, Millie continued to put others first.  “During her father’s final years, she moved into his home to care for him so he could remain there as long as possible.  While her father was a loving man, Alzheimer’s Disease took its toll on all of the family and created many challenges.”

Ruth continued, “An example of the kind of spirit Millie has is best explained in her opening up her home to a 10 year old little girl named Sierra who suffered with severe autism and many health issues.  Sierra’s adoptive mother could no longer care for her and was struggling with what to do.  Millie offered to take Sierra into her home and care for the little girl until other arrangements could be made or until the mother felt she was able to care for her again.  Sierra lived with Millie for 2 years before she passed away.”

“In December, 2012, during a routine examination, the doctor became suspicious of the symptoms Millie was presenting.  After further testing, it was discovered that she had stage 4 lung cancer that had spread to her liver, bones and lymph nodes.   She received chemo and other treatments with a life expectancy of approximately 2 years.”

Ruth Hamlin nominated Millie for this Dream and in true Millie fashion, she first declined as she thought someone else was more deserving. 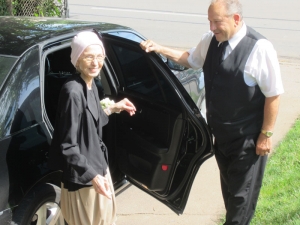 Millie’s dream was simple; she wanted to attend a play.  Millie’s dream began with a few of the Board Members taking her on a shopping spree at Von Maur.  She picked out two pairs of shoes — one for every day and one for dancing. J  We also convinced her that every woman needs a favorite purse so that was also added to the list.  And the day couldn’t be called a success without stopping by The Cheesecake Factory to taste some of their delicious cheesecake!

With both of Millie’s shoes being open-toed, we knew the next phase in her Dream was a stop at the salon for a manicure and pedicure.  This would be Millie’s first ever professional pedicure and she loved it!  As one of our Board Member’s – Noreen – confirmed, her toes looked very festive for the 4th of July and her nails looked beautiful with a French manicure!

Her Dream took place on Wednesday evening, June 26th.  It began with VIP Limo coming to Millie’s house to pick her and her sister, Marilyn, up for “The Girls Night Out.”  They were swept off in their chariot for an evening of enchantment.  The first item on the agenda was dinner at one of Omaha’s top dining establishments, Fleming’s Prime Steakhouse.  The ladies enjoyed a delightful dinner and reminisced about old times.  With time remaining before the play was to begin, Jeffrey Caniglia – the limo driver – and Kelsey – one of our Board Members – took Millie and Marilyn on a tour of Omaha!  They began by driving west and ended up at Boys Town, which both Millie and Jeffrey had childhood memories of.  It was sweet to hear them reminisce about times gone by.  After a 30-minute tour, they were off to the Community Playhouse to see the Wizard of Oz and to finish out their night in an enchanted land.

Board Member/photographer, Catherine, was on-sight to capture Millie’s special evening and Board Member, Carly, helped to see that all went without a hitch during the trip down the “Yellow Brick Road.”

The Dreamweaver Foundation would like to acknowledge those that made this Dream so successful.  Thank you, Ruth Hamlin, for nominating this amazing and inspiring lady.  Thank you, Piccolo’s, for donating the two beautiful corsage’s for Millie and her sister.  Thank you, Fleming’s, for the wonderful service and the dinners donated to make their night a memorable one!  Thank you, Jeannine Robertson and Omaha Community Playhouse, for not only graciously donating tickets to Millie and Mildred, but also for finding a seat for Jeffrey so he could enjoy the performance as well.  Thank you, Jeffrey Caniglia, for being the most wonderful limo driver we could have asked for!  And lastly, thank you to all of The Dreamweaver Foundation’s Board Members for helping out in so many ways.  Without your hard work, her “Dream” would not have been possible.

Only 4 short days after Millie’s “Dream” had taken place, she was admitted to the hospital where she found that her cancer had spread to her brain.  She then entered into hospice where she lived with her daughter here in Omaha.  A few of the board members visited her and gave her the photo album of her “Dream.”  She began to tear up, as did everyone in the room, as she looked through the pictures of her and her sister and their beautiful evening they got to share with one another.

Millie passed away only a couple of weeks later, but we know she is home now.  As one of the famous lines from The Wizard in “The Wizard Of Oz” states . . .  “A heart is not judged by how much you love; but by how much you are loved by others.”  As was evident by those that spoke about Millie at her funeral, not only did she love others tremendously, she was tremendously loved!  Millie has touched all of our hearts and will never be forgotten.

“It was such a great experience for her!  What a wonderful way to make a simple person feel like a princess for a day.”

-Tiffany Gano, one of Millie’s daughters

“I want to thank the Dream Weaver Foundation for that special night they gave my mother and her sister.  She was just tickled pink about that night from the dinner to the Omaha Play House.  I loved my mom so much and again I want to say thank you from the bottom of my heart.

“You cannot live a perfect day without doing something for someone who will never be able to repay you.” – John Wooden