For years, Mike’s favorite travel destination was Nashville, TN. He loves the energized environment that surrounds live music. About 15 years ago, he started to notice a change in country music. It was more “hip-hop” country than the good oldies…like Willie Nelson and Conway Twitty. That’s when he decided to leave his vacation in Nashville to travel 7 hours west to Branson, Missouri. Branson had the country music that brought back memories of his younger years without the crowds of Nashville. Since then, Branson has become his favorite country music destination. 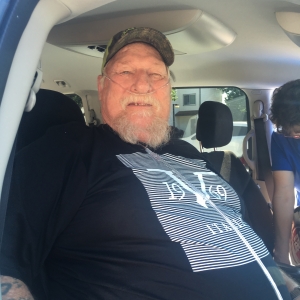 Every summer, Mike traveled with his family from Lincoln for a getaway to Branson. Mike has done and seen it all in Branson. From Dolly Parton’s Stamped to the Hollywood Wax Museum. But, seeing a show at Clay Cooper’s Theater will always be his favorite and staple in his trips to Branson.

It has been nearly three years since he has been to Branson. He reminisces often about the summers spent listening to good country music. When Karen, Tabitha Hospice Social Worker, heard about Mike’s dream to visit Branson one last time she knew who could help, Dreamweaver Foundation! About a week after we met Mike, he and his friend, CL, were road tripping to Branson, Missouri from Lincoln, NE. They spent their days touring around Branson and their nights listening to live music. Of course, making a stop at Clay Cooper’s Theater for a show.

Thank you Tabitha Hospice, Rent-A-Van, VIP Limo and Lodge of the Ozarks for partnering with Dreamweaver Foundation to fulfill Mike’s dream.