There is nothing like game day in Nebraska.  The state becomes a sea of red as men and women young and old rally to see the Cornhuskers play.  Over the years, Mike and Sandy McManigal attended several Husker games. Mike was Sandy’s high school sweetheart; they fell in love married and raised their family in rural Crescent, Iowa.  According to Sandy, they have been together their whole adult life. 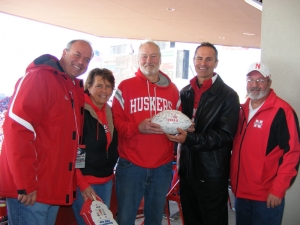 Mike was a talented mechanic known and trusted by everyone.  He was forced to take an early retirement when his memory began to fade making the work to difficult and frustrating.  Sandy owns a dog grooming and boarding business at their home.  Now, she has Mike as her partner helping with the bathing and caring for the animals.

Sandy’s smile is infectious and her servants heart gives way to not only helping every stray animal that comes her way, but also every person God puts in her path that needs a helping hand.  However, this last year has been extremely difficult for Sandy Not only has she been caring for her husband and watching him slowly slip away, but she has also been caring for her mother.

I actually learned about Mike’s condition while I was working on a dream for Sandy’s mother. Unfortunately, we were not able to complete her dream before the cancer she was battling took her life.

To grant Mike’s dream we sent Mike and Sandy on a very special date.  They were escorted to breakfast and off for a fun filled game day in Lincoln, NE.  Of course, we wanted to make sure they were dressed for the occasion in Husker gear so new sweatshirts were purchased along with a big red #1 finger to show their support.

Once the game was over, the group headed back to Omaha to enjoy a delicious steak dinner with all the trimmings at Anthony’s Steakhouse. Laughter and joy filled the table as once again a couple in love was able to enjoy a night on the town.  Dreams like this are made possible thanks to the generosity of the many “Dreamweaver’s” who believe and support The Dreamweaver Foundation.