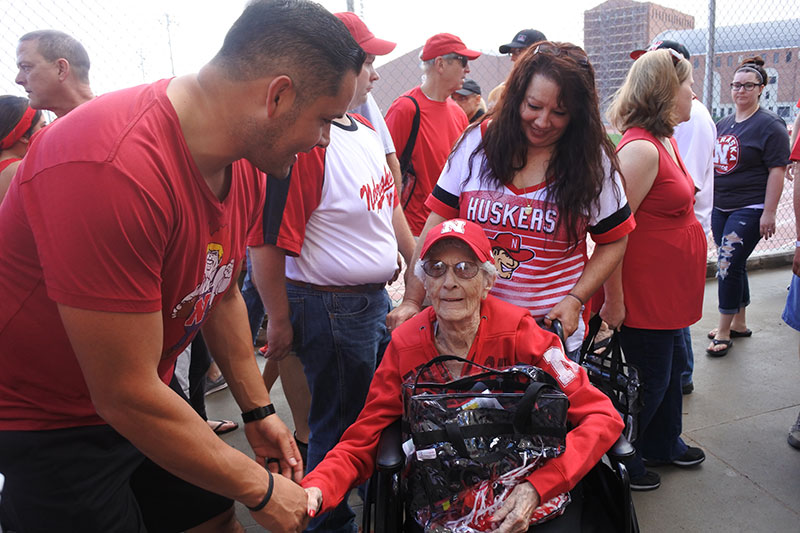 On a beautiful, fall Saturday morning; Mary was on her way to enjoy her first Husker game in almost 78 years! 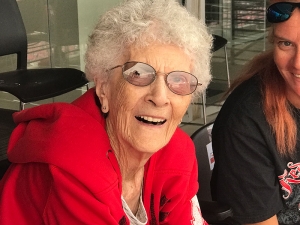 Mary was born and raised in Lincoln and lived there most of her life.  She graduated from Bethany High School in 1939 and worked as a waitress to earn money to attend Husker games.  She remembers attending most games with her friends and paying just $.10 for a ticket! Mary and her husband moved to Kentucky while he trained for WWII.  After a year, they moved back to Lincoln and started a family.  They have two children, Sharon of Wahoo and Josie of Kentucky.  In 1953, Mary went back to college at UNL to earn a degree as a dental assistant.  She worked as a dental assistant for almost six years before switching careers to a bookkeeper.  When she “retired” from bookkeeping, she started working in the dining room at Wendy’s for something to pass the time.  She only planned to work at Wendy’s for six months, but ended up staying 15 years because she loved interacting with the customers.  She left not because she was ready to retire, but because her position was eliminated.

Throughout her life, Mary has never missed watching a Husker game.  She spread her love for the Cornhuskers with her 8 grandchildren, 11 great grandchildren and 10 great, great grandchildren! Her granddaughter, Brandy, became Mary’s football watching buddy over the years.  Last season, Mary and Brandy were watching the game at Mary’s apartment.  She was yelling at the tv because the Huskers were playing terrible.  Her neighbor heard the yelling and thought she was hurt so she called the police. The police arrived and saw Mary was not hurt, just a little upset at the Huskers!

Mary now resides at South Haven Living Center in Wahoo and still never misses a game.  Her physical therapist, Will Morales, heard her story and knew she needed to watch a game again from Memorial Stadium.  The day before the game, Dreamweaver presented Mary with her tickets donated from the Huskers and new Husker apparel donated from Scheels.  Mary watched the Nebraska vs Northern Illinois game with her football buddy, Brandy, and her favorite caregiver, Jacquie.

Dreamweaver board members and Cheri, executive director, greeted Mary at Memorial Stadium.  During the first quarter, staff from the Huskers personally thanked Mary for attending the game and presented her with a signed program from Coach Mike Riley.

Brandy said, “it was just perfect a perfect day.” We want to give a big thanks to Will Morales, South Haven Living Center, Scheels and the Cornhuskers.  With help from our community partners, this Dream was possible!   GO BIG RED!