Mary was a recent high school graduate when she enlisted in the Air Force. Born and raised in South Dakota, then, spending a few years in Fremont with her sister she was looking for a new adventure, that adventure was joining the Air Force! When she found out she would be stationed in New York City she was a little nervous, but very excited!

In New York City, she casted false teeth for Air Force men with missing teeth. Often times the Army was given discounted or free tickets to Broadway Shows. Mary loved taking advantage of the tickets while “other women were catching husbands”! 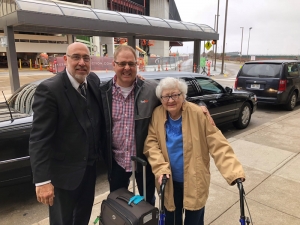 After three years in New York City, Mary returned to Nebraska to raise her children. At 40 years old, Mary went to school to earn a Bachelor’s Degree and Master’s Degree in English. Her son, John, remembers his mom being a very hard worker: going to school, working and raising a family full-time!

Sarah from ENOA knew how much Mary would love to see a Broadway Show in NYC again, so she called the Dreamweaver Foundation for a little help! Mary knew there would be more walking than she was used to with the hustle and bustle of a busy city. She started walking laps around her facility and lost 15 lbs.!

In mid-April, VIP Limo escorted Mary and John from Woodbridge at Waterford Home in Plattsmouth to Eppley Airfield for her flight to New York City! This would be her first trip back to NYC in nearly 60 years! Just like when she was young girl moving to New York City, she was a little nervous, but excited for the adventure.

Mary and John had a short stroll to the New Amsterdam Theater from their hotel near Time Square. They were amazed by the beautiful theater and the theatrics of “Aladdin“! She could not believe how much New York City had changed, many more tall buildings and people!

Mary said, “Everything was just wonderful. I really enjoyed spending time with John.”

Dreamweaver Foundation would like to thank ENOA, Travel and Transport and VIP Limo for partnering with us to fulfill Mary’s Dream!