There are few things that mean more to Marvin Dixion than family and sports. Growing up in Arkansas with nine sisters and three brothers, the Dixion family bonded through meaningful time together, often engaging in fun activities or gathering around for a meal. Inspired by the St. Louis Cardinals, Marvin played baseball and thrived in catching the ball at shortstop as a young man. 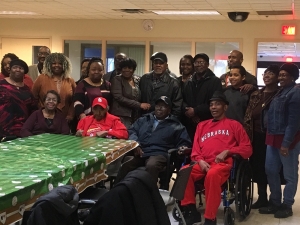 As time passed, the siblings left their Arkansas home, moving for new opportunities for work and family. In his 20’s Marvin joined some of his siblings in Omaha to pursue various positions in the packing industry. Despite their physical separation by state lines, the Dixion family remained close in communication and love.

Marvin enjoyed hunting, playing dominos, and would always take up an offer to visit Horseshoe Casino in Council Bluffs. His kind and approachable demeanor attracted friends and family who needed a laugh or smile.

This gentle demeanor and ability to connect was still evident, ten years after his Parkinson’s diagnosis. Marvin has been living at Florence Home for many years and thanks to April Hauf, he was nominated to receive a Dream. After speaking with his niece, Brenda Bird, it was decided that reconnecting with family was the best dream Marvin could receive.

Although his family looks much different now—many siblings have passed, others have married and had children, and some were just meeting for the first time—the love and laughter was abundant. The family gathered around a baseball-themed table with delicious food from Cracker Barrel. Corn, mashed potatoes, gravy, and baked beans accompanied the special entrée—meatloaf and chicken fried chicken. The aroma that filled the room brought back nostalgic feelings of a good home-cooked meal.

Wearing a new Cardinal’s jacket and baseball hat from Scheel’s, Marvin spent the afternoon surrounded by his family, exchanging stories and hugs. Nieces, cousins, uncles and aunts were gathered around the table, like Marvin had done with his family years ago. People came from different cities and faraway states, but traveled Omaha to visit Marvin. Many family members mentioned this was the first time everyone’s been together in a while, and the room was filled with gratitude. Although he wasn’t able to verbally communicate, the gentle smile appeared in Marvin’s eyes which reassured everyone that this Dream was incredibly special.

Thank you to Florence Home, Cracker Barrel Council Bluffs, and Scheel’s Sporting Goods for making this dream possible for Marvin.