Marjorie “Marge” Bokemper is by far Alan Jackson’s biggest fan!  This mother of four worked all her life to make ends meet.  At 62, she retired due to health concerns but continued working part-time.  Her children vividly remember the radio always on at home.  She found joy and happiness through country music, specifically Alan Jackson’s music! 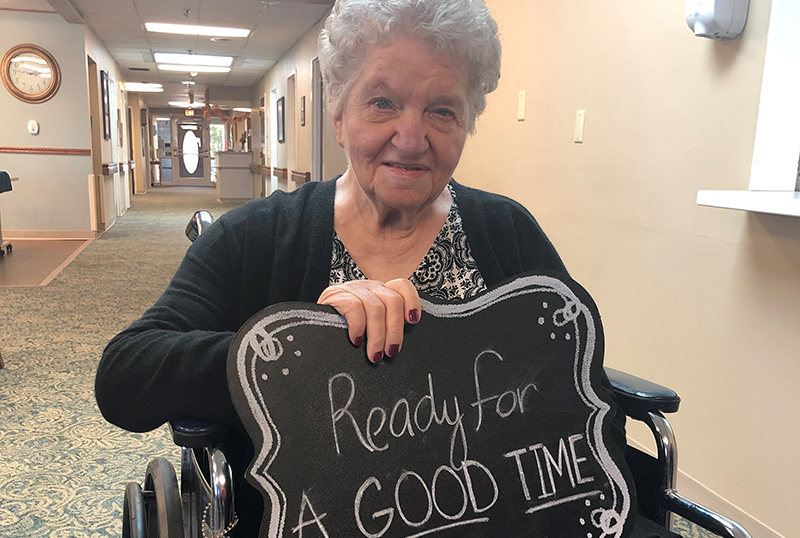 Marge now 76 has some dementia but has struggled with speech due to Transient Ischemic Attack (mini-stroke).  This has caused some trouble with word-finding and expressive language, but her receptive language is still intact.  Music; has bridged that gap.  Familiar songs and words come naturally.  You should hear her sing Chattahoochee!  The words to the song flow beautifully out of her mouth.

Marge was nominated by Kellie of Heritage of Emerson to fulfill her dream of seeing Alan Jackson perform live in Omaha in September 2018.  She’s watched him perform on all the award shows, but this was going to be her first time seeing him live on stage. But, due to different circumstances, the concert was not only rescheduled once but twice!

When the concert was rescheduled the second time, Dreamweaver Foundation reached out to Alan Jackson in hopes he could connect with Marge to keep her dream and spirits lifted while she anxiously awaited his show.  A couple of months later, unexpectedly, Marge received a package from Alan Jackson’s fan club! With so much excitement she opened the package to find an Alan Jackson t-shirt, a letter addressed to Marge and an autographed photo! A huge grin came across Marge’s face as she looked at his photo.

Everyone was on edge leading up to the day of the concert wondering if it was actually going to happen this time. After months of staring at a photo of Alan Jackson, it was finally time to see him in person!

VIP Limo transported Marge, her daughter, Penny, and granddaughter, Maddie, to Omaha for the big show.  After resting for a couple of hours in the hotel, Marge was prancing around the room with excitement; it was finally time to head over to the CHI Health Center. The opening act, William Michael Morgan, just took the stage as they arrived.  Marge was dancing and clapping in her wheelchair.  Finally, Alan Jackson walked on stage and Marge’s eyes light up and a big smile appeared on her face.  She surprised her daughter and granddaughter by jumping out of her wheelchair to dance and sing along.  Song after song, Marge sang and danced along.  Even asking Penny and Maddie if she could go on stage!