Fishing is a pastime shared by the generations. Lyle and Bob, residents at Hillcrest Shadow Lake, were avid fishermen in their younger years. When Colleen, Hillcrest Chaplin, heard Dreamweaver Foundation partners with Live Well. Go Fish to fulfill fishing dreams, she knew Bob and Lyle would love this experience. 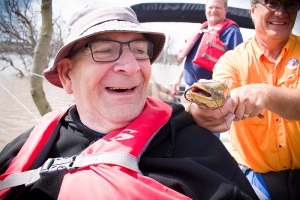 Lyle has been an outdoorsman his entire life. Saturday’s were his day to play outside: fishing, hunting or trapping. On Sunday, he did what his wife wanted to do, mostly visiting family. Raising two daughters, he often took them on his Saturday outdoor adventures. Now, he has two sons-in-law and a grandson that also love the outdoors.

If Bob wasn’t working, he was fishing! He dedicated 22 years of his career to Paminda before going on disability due to a knee condition. His most memorable fishing trip was in Branson, Missouri where he caught 115 fish! That was enough for a couple fish fry get-togethers! He passed down his love for fishing to his son, Bob Jr, and now his grandson, Tommy, also loves to fish. 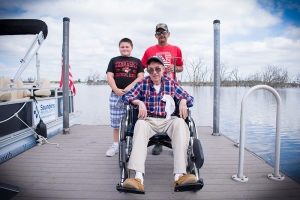 On a cool September morning, Lyle and Bob headed from Papillion to Lake Wanahoo for a generational fishing trip! Son-in-law, Albert, and grandson, AJ, welcomed Lyle. Bob Jr and Tommy arrived just in time to fish with their dad and grandfather. The week before the fishing trip, it rained every single day causing the water to be a bit muddy. The muddy water makes it hard for the fish to see the bait. It was a slow day of fishing, but a beautiful day to be on the water touring the Lake and listening to the Husker game. Then, after a couple hours with fishing poles in the water, Bob caught a 13.5 lb bullhead catfish!

Even though it was a slow day on the lake, it was a great day to reminisce and create new memories with family.