Hands tell stories. The calluses, the wrinkles, the shape and size of each finger display a map of an individual’s life. Lloyd’s hands were strong and revealed a lifetime of use. 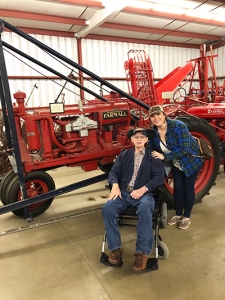 Lloyd used his hands as tools his entire life. Growing up in Pawnee County, Nebraska, he farmed with his father until age 20. After his father passed away, Lloyd continued to use his hands doing maintenance for the city. Whether his hands were in the dirt or on the pavement, he was creating a pivotal product.

When deciding on Lloyd’s Dream, his granddaughter wanted to do something special for the man who had made such an impact on their lives. Lloyd married Stacie’s grandmother, Viola, at the age of 72 years old. He was like an “adopted Grandpa” Stacie said. Viola and Lloyd had wonderful years together living in Lewiston, Nebraska, traveling to Branson, and spending time with their large family. Lloyd cared for his wife until she passed.

Lloyd had continued to use his hands as he got older, this time focusing on softer skills. He raised water lilies and made wooden toys, often depicting farm equipment he used as a boy. His hobbies kept him busy and engaged.

However, the symptoms of Parkinson’s began to challenge Lloyd’s physical abilities. Stacie brought Lloyd closer to her in Lincoln, where he resided at Sumner Place. Shannon at Sumner nominated Lloyd to receive his Dream, knowing that he would value special time with his family.

The plan was set for Lloyd to visit Pioneer Village in Minden, Nebraska. On an early morning in April, Lloyd and his team of supporters took the two hour roadtrip to visit the attraction. Pioneer Village is a collection of 26 buildings, filled with artifacts and items from Nebraska’s past.

As Lloyd and Stacie toured the village, Lloyd was in awe of the old equipment. Memories of life on the farm and time in rural Nebraska came back to him. Dreams sometimes feel like trips down memory lane, a time to reflect on the people and places that have been most significant in life.

“We made memories to last a lifetime,” Stacie shared. The photos of the group displayed the happiness everyone felt that day. Lloyd traveled back to Lincoln with new memories, as he looked down at his hands, remembering all they have seen, built, and shared.