Growing up listening to country music, our Dreamer Lea looked up to stars like Dolly Parton and Loretta Lynn as role models who inspired her to face every challenge with a combination of faith, determination, and spunk. Lea found herself relying on these role models for inspiration over the last year as she battled pancreatic cancer during a pandemic. As she recovered from a major cancer surgery while isolated from family due to the hospital’s COVID safety protocols, Lea stayed positive by listening to her favorite singers on the radio and holding onto her Dream: to visit Nashville, the country music capital of the world, with her daughter! 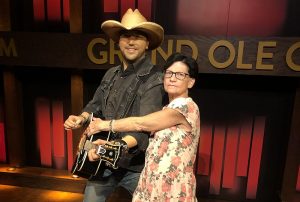 Lea regained her strength and was ready to participate in her Dream in June. Leading up to the trip, we met with Lea and Bobbie Jo and discovered that their passion for country music ran deep, they called country music “the only kind of music.” This mother and daughter have a closeness that comes from living a block apart and from being there for each other through good and bad times. The duo explained that they have always wanted to visit Nashville together, but life had always gotten in the way.

While Lea and Bobbie Jo were the picture of faith and determination during their interview with us, you can see their spunk really shine through in the pictures from their trip! They really got into the spirit of things during the Dream, coming out of their shells at Madame Tussauds’ Wax Museum in Nashville, as they posed with their favorite country music stars!

Lea and Bobbie Jo were treated like royalty by the hotel concierge, Hannah, who pointed them in the right direction to find an unforgettable fried bologna sandwich and to listen to great live music! A little birdie from Dreamweaver told the folks at Dolly Parton’s restaurant, “The White Limozeen” that Lea and her daughter were coming and that they were big Dolly fans. Dolly’s crew took great care of them, paying for their bill and making sure they had the best (pink!) seats in the house! Lea and Bobbie Jo also enjoyed their time aboard the General Jackson Country Music Cruise, where they saw several acts and were able to meet the boat captain.

Coming back to Nebraska after this long-anticipated dream getaway was difficult, but the trip inspired Lea and Bobbie Jo to stay positive and to hold onto their dreams. Plus, it gave them lots of memories (and hundreds of pictures!) to look back on!

Dreamweaver would like to thank Holston House Nashville for rolling out the red carpet to make Lea’s dream even more special. We would also like to thank the staff at “The White Limozeen” and General Jackson’s Showboat Cruise for giving our Dreamer an incredible experience and creating unforgettable memories!