Larry loves old cars and cheese. Of course, never eating cheese in his car! His love for cars started early, his first car was a 1926 Chevy. Later, he drove a 1935 Ford. Always proud of his cars. He does not know when and why he loves cheese, he just knows he does.

Cars and motors were not only Larry’s hobby, but also his job. He worked at Cushman Motors for 30 years assembling scooters. He loved his job! Living at Sumner Place, Larry has everything he needs right there, including a stock of cheese! Getting out and driving old cars is a distant memory. Shannon, Dietitian at Sumner Place, wanted to give Larry the chance to be around his two loves again. Dreamweaver Foundation stepped in to help make Larry’s Dream possible. 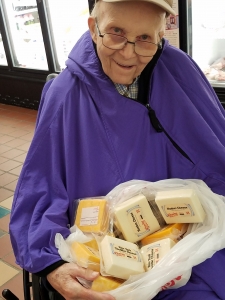 It was a rainy summer day, not a great day for a drive, but a perfect day to be inside at a car museum. Larry’s day started with a “good fish lunch” at Red Lobster! Joining him was his Tabitha Hospice aide, family members, Karen, Larry, Kathy and a very special guest, his sister Lorna. It was a very special day, because it had been nearly four years since the siblings had been together outside the nursing facility. After everyone was stuffed of seafood, they headed to Museum of American Speed for a drive back in time. The museum preserves automotive and racing history in a huge 150,000 sq ft three level building. They have everything from vehicles, engines, even a Cushman Motors sign! After a couple hours strolling the museum, it was time for the final stop on Larry’s Dream…the UNL Dairy Store!

Larry said, “WOW” in shock when Karen told him he could have more than one package of cheese. Larry was like a kid in a candy store, so happy to get his cheese! He left with an ice cream cone and stockpile of cheese that will last at least a couple of months.