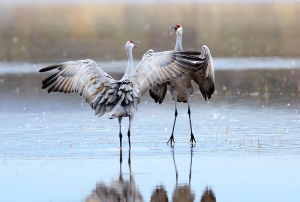 Willie Nelson played on repeat in John’s head as he reminisced about his love for exploring the open road.

In his younger years, John moved around central Nebraska because of his father’s job with the railroad.  York, Cairo, Wood River and St. Paul all became “home” before finally settling in Grand Island as an adult.  As a family, they would hop in the car; most trips without a plan or itinerary. They simply let the wind determine their path. His favorite trips were always traveling down Highway 2, marveling at the Sandhills.

John carried his love for traveling into his marriage.  One of John and wife Connie’s favorite stops was near Alda, Nebraska to view the Crane Migration every spring.  Due to John’s declining kidney health, it had been nearly a decade since he took the 20-mile road trip to view the awe-inspiring Sandhill Cranes.

With help from Dreamweaver Foundation, John was able to get on the road once again. Alongside Connie, the couple set out on an unforgettable road trip to the Crane Trust Nature and Visitor Center near Wood River.  More than 600,000 cranes make the Platte River their home for a short time before heading North to breed. John and Connie were grateful to experience this time together, creating a new memory in a familiar place.

Thank you Area Agency on Aging for nominating John to fulfill his dream.