Jean grew up on a farm outside of Fremont, Nebraska. Pigs, cows, goats—they had it all! When she wasn’t helping her dad with farm chores, she loved playing with her farm dogs.

The country girl in Jean always stayed with her, even when she became an adult and left the farm. She continued to raise dogs. Otis, a white Bichon, became her best friend. 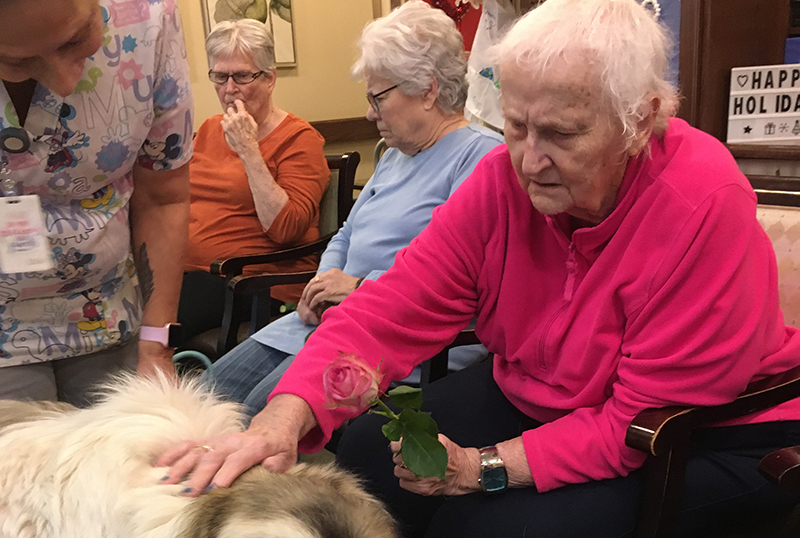 Over the years, Jean’s Alzheimer’s worsened and she began to receive extra care at Providence Place in Fremont. She chatted with Heather, her Serene Care Hospice social worker, about her time on the farm.  Heather wanted to bring her memories to life and create a farm animal encounter.

Serene Hospice partnered with Dreamweaver Foundation to bring the whole barnyard to Jean. Dreamweaver reached out to Scatter Joy Acres, a home for rescued and neglected animals in Omaha, in hopes they had animals that would bring Jean’s memories to life. Scatter Joy has over 100 different animals: alpacas, sheep, pigs, and even a camel. They have it all!

Kim, a Scatter Joy Acres volunteer, brought a 30 pound dwarf goat named Axel and a 120 pound Pyrenees dog named Paladin. Jean was astounded to see the two very different animals, but she couldn’t take her eyes off of the giant dog!

Jean’s nephew and niece-in-law also joined in the farm animal fun. Serene, Providence Place and her family watched as she interacted with the animals.