James “Jim” Kouba has been a Dallas Cowboys fan since he was in third grade.  It all started when another third grade boy had an infatuation with America’s Team.  Jim wanted to know what all the hype was about, now 44 years later, he is still cheering for the Cowboys every Sunday and Thursday during the fall! 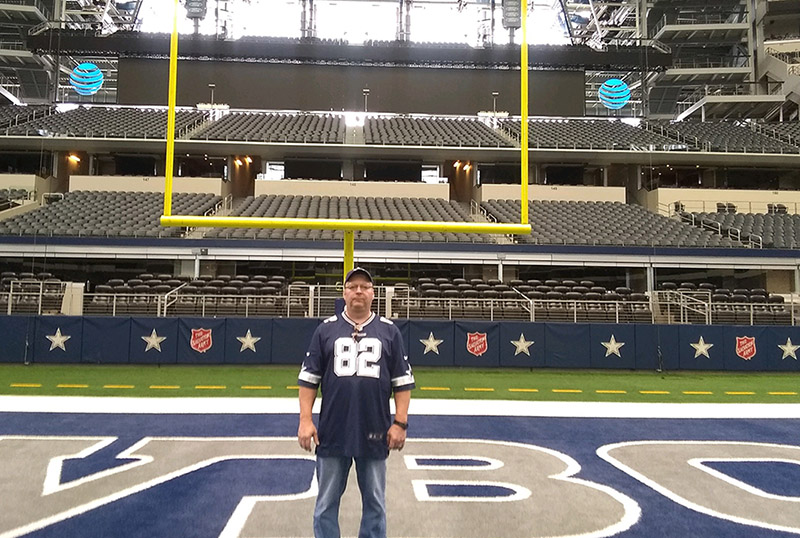 Ten years ago, Jim was diagnosed with Melanoma.  Many hard working years in the sun had caught up to him.  After a biopsy of the cancerous mole, he was cancer free.  Then in 2013, another Melanoma spot appeared – his cancer came back.  At first Jim gave up – saying good-bye to his family and friends, passing down his prized Cowboys possessions to his three kids.  But then, Jim decided to fight. And he has been fighting his metastasizing cancer for the last six years.  He knows his health is declining and decided to go after his Bucket List dream to meet Jason Witten on the Dallas Cowboys field.

After coming out of one year in retirement, Jason Witten is having the best off-season of his career. He’s stronger and more determined than ever for the fall 2019 season.  Knowing how busy Jason is, Jim decided his dream would still be fulfilled if he could see the field Jason plays on.  A few weeks later, Jim and his wife Rita, were standing on the 50-yard line at AT&T Stadium.

The couple received an exclusive, private 2-hour tour of the Dallas Cowboys arena.  They were able to get a sneak peek of the executive offices, VIP dining rooms and suites for the elite fans.  But nothing compared to the experience of running through the team’s tunnel onto the field!  As Jim recalled running onto the field, he exclaimed, “That’s the field I know!”  Rita added, “I loved seeing the big smile on his face as he entered the field.”

Dreamweaver Foundation would like to thank Travel and Transport, VIP Limo and Dallas Cowboys Tour Sales for partnering to grant Jim’s dream.