Throughout the 1980’s, James Warner cruised the streets of Omaha in his 1976 cherry red Corvette. When he wasn’t in the car, he was on his bike. He and the South Omaha Bike Club rode their Harley’s around town. James (or “Jim” to his biker friends) has always had an appreciation and excitement for fast-moving, high-powered, beautiful vehicles. 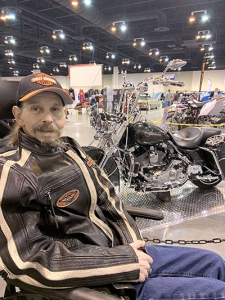 There was a calendar on his wall, opened to a cherry red Corvette. “It’s just like mine” he tells us. Wearing his Harley Davidson hat, James tells stories of coming back from the war and ready to celebrate by buying a new car. “I earned it!” he laughs. After serving three tours as a Marine in Vietnam, he certainly did.

When deciding on James’ dream, there was no question we had to involve cars and bikes. Coincidentally, the 2019 Autorama Car Show was being held at the CHI Health Center on his birthday weekend! He was thrilled to know he would be spending his special day admiring and remembering all the magic cars had brought to his life.

On March 17th, James arrived at the CHI Health Center in his new leather Harley Jacket and ball cap right as the doors were opening. Endless Journey staff Jay, Dreamweaver staff Lindsay, and James strolled the rows of cars. With over 200 automobiles, bikes, racecars and trucks, there was a lot to see.

James most enjoyed looking at the Omaha Corvette Club’s collection. He didn’t spend much time looking at the newer models, he was impressed by the older ones. “Get me to that one” he pointed, looking at a 1976 cherry red corvette. Just like his.

After seeing the cars, buying some memorabilia, and touching the bikes, James was ready to head home. He arrived back to Florence Home with a Surf and Turf meal from Red Lobster waiting for him. The chocolate cake was an especially delicious surprise to end his birthday celebration.

“I had a blast, thank you from the bottom of my heart,” James said with a wink and a smile.