Since Jack was 7 years old, he has been training and racing pigeons. Now, 88 years old, Jack has been involved in Omaha’s pigeon racing community for 79 years! 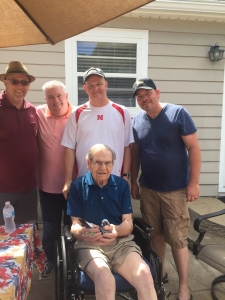 When Amy from Hillcrest Hospice learned about Jack’s love for pigeons and pigeon racing, she contacted Dreamweaver Foundation to help Jack reconnect with his passion. After doing a little research about pigeon racing in Omaha, we contacted Carter from Omaha Racing Pigeon Association. Carter was eager to partner with Dreamweaver as he and many members remember Jack! It was a perfect 80 degree Saturday in June. The night before, nearly 700 pigeons started their 500-mile race back to Omaha.

Jack waiting patiently for the birds to arrive at the Warren’s residence. In the mean time for the birds to land, he enjoyed snacks and catching up with his fellow Omaha Pigeon Racing members. Many members stopped by excited to visit with Jack. After an hour, the first two birds finally arrived!

Diane reported, Jack had a great time, he was so happy! He was all smiles and giggling like a young boy again on the drive back to Country House. The Warren’s invited Jack back anytime to join in a pigeon race event. Wayne, son, and Diane, daughter-in-law are hoping to get him to another race this summer.