While some love stories have a clear beginning with a chance encounter, Jack and Gayle say that they “grew up together”.  As a friend of Jack’s sister, Gayle spent as much time as possible at Jack’s family’s home, because it was such a fun place to be.  Much of this fun centered around fishing, and the couple (even before they were a couple) spent lots of time out on the water, baiting hooks, chasing fish, and enjoying nature and the company of one another.

Fishing remained a cornerstone of Jack and Gayle’s fun even after they were married.  Fishing trips with family and 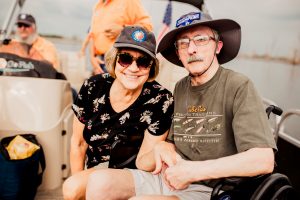 friends helped instill a love for fishing with their own children, and helped the couple deal with life’s stressors, including Jack’s diagnosis of early onset Parkinson’s disease.  As a resident at Ridgewood Rehabilitation and Care Center in Seward, and with the COVID-19 pandemic health and safety protocols, Jack had limited access to his favorite hobby.  Ridgewood’s wonderful staff knew how important it was to get Jack back out on a boat as soon as possible, and they contacted Dreamweaver Foundation to schedule a Dream Fishing Trip for Jack as soon as COVID-19 restrictions were lifted.

When we met with Jack and Gayle to plan the trip, it became evident how serious they were about fishing (Jack’s’ love of the LA Dodgers also came up!).  Rather than having the trip be planned around his medication schedule, Jack wanted to consult an almanac to pick a time when the fish would be biting.  We knew these serious fishermen would be in great hands with our friend David and his volunteer fishing guides at Live Well. Go Fish.  As we talked more with this couple the perfect date for their fishing trip became clear, and it had nothing to do with the almanac or weather forecast!  Jack and Gayle’s Dream Fishing Trip was set for their 49th wedding anniversary, July 15th.

VIP Limo picked up Jack, Gayle and their son L.J. and whisked them away to Lake Wanahoo for a sunset fishing cruise with their friends Bruce and Suzy.  David and volunteers from Live Well. Go Fish.  greeted them at the dock, and Amber of Amber Rae Photography snapped pictures of the group as they stepped out of the limo.  In honor of their anniversary, the boat was decorated with a life-sized photo of the happy couple. The group enjoyed bites of picnic fried chicken, potato salad, fresh fruit and cupcakes between casts, reeling in fish and fishing stories. The expert guides at Live Well. Go Fish. helped ensure that everyone caught a fish, and they even volunteered to clean Jack and Gayle’s walleye for them!  The limo returned a very tired but very happy Jack back to Ridgewood, where the staff was ready to welcome him home and put his fish on ice for his morning breakfast!

Dreamweaver Foundation would like to thank Ridgewood Rehabilitation and Care Center in Seward for introducing us to Jack and for cooking up his fish for breakfast, to Live Well. Go Fish. Nebraska for making Jack’s fishing dream come true, and to Amber Rae Photography for documenting this happy couple’s 49th anniversary celebration on the lake!