Herb Townsend is undeniably an incurable romantic.  Every year for 29 years he presented his wife Susette with a yellow rose on their anniversary. With Herb’s health failing, he confided in his Hospice social worker his desire to do something special for Susette on their 30th anniversary,  Donna, the social worker for Southwest Iowa Hospice knew exactly who to call.  Once the Dreamweaver Foundation team found out about Herb’s dream to take his wife out for a special dinner at Red Lobster, her favorite restaurant, the fun began.  Herb wanted to surprise Susette, so everything was planned and arranged while Sussette was at work or out running errands. 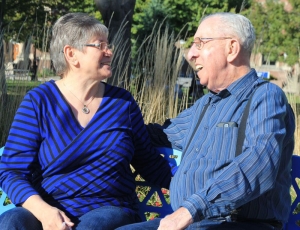 On Saturday, October 24th the florist arrived with a bouquet of 29 roses and one yellow rose to celebrate the anniversary and signify their tradition of one yellow rose.  Susette could hardly believe it, and at that point she thought the beautiful bouquet was her special gift from her beloved romantic husband.

On Sunday, when Herb got dressed in his good clothes she started to think something was up, but when six family members and a stretched limo arrived, her breath was taken away.  Once everyone was loaded into the limo the group began the drive through Council Bluffs, Iowa to Baylis Park.  It was a beautiful day and the group was meant as they arrived by members of the Dreamweaver Foundation, where Herb and Susette were presented with the traditional Dreamweaver blanket along with a Dream necklace for Suzette and a new Dreamweaver wallet for Herb.  Pictures were taken in front of the waterfall and stories were shared as each talked and laughed about their memories of years gone by.

Once the photos were completed, everyone piled into the limo for the ride to Red Lobster where they were treated to a special meal of their choice with no worries about where the money would come from to pay the bill. After a relaxing meal and plenty of conversation, the group returned home sipping champagne and toasting 30 wonderful years of marriage, family and unending friendship. As their time together drew to a close, everyone agreed this day of wonderful memories would not soon be forgotten and that Herb had definitely done a good job of surprising Susette.  Although the day was over, the family and friends will be able to relive their memories through the book of photos and once again be reminded that illness doesn’t have to dampen one’s spirits or love.

For Herb this was a dream come true, for many years due to his health the couple had struggled to make ends meet.  They were happy and their home filled with love, but little extra’s were few and far between. This may have been their last anniversary together on this earth, but thanks to the Dreamweaver Foundation it was everything Herb dreamed it could be.