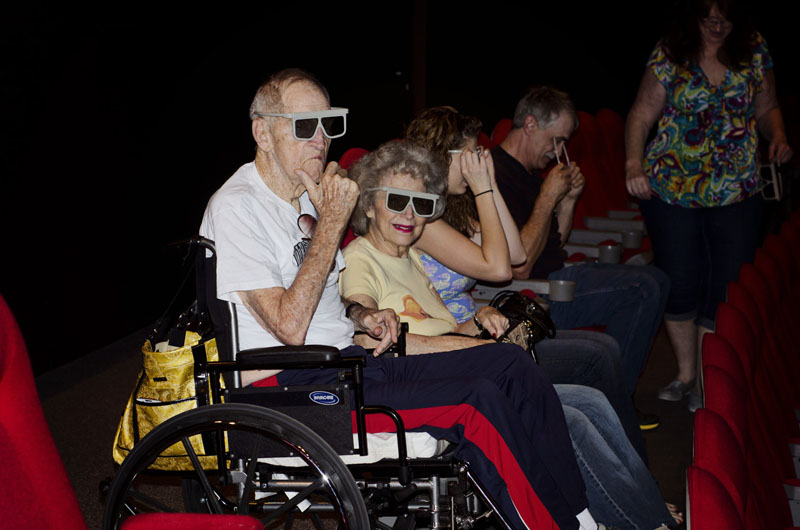 While driving through Bently, Iowa, after taking a load of cattle to Omaha, Harry’s buddy asked him, “Did you see that?”  To which Harry replied, “No, what?”  Harry’s friend turned around and drove back to the local gas station to show Harry the brown haired beauty that caught his eye.

It just so happened when they stopped at the gas station, they discovered that the beauty’s dad was the owner.  Harry jumped at the chance to get her name and they decided to attend the first of more than 65 years of dances, including many at the Peony Park Ballroom.  This beauty ended up being Harry’s beautiful wife, Mary Catherine.  To this union, three children were born, blessing them with six grandchildren and six great grandchildren.

At 92 years of age, Harry was diagnosed with congestive heart failure.  After, a friend, Donna, heard Harry’s daughter, Cynthia, say that she would love to take her Dad to the zoo, Donna Wilhelm wanted to nominate Harry for a special “Dream.”  However, what was going to make this “Dream” even more special was the fact that Harry’s granddaughter, Jennifer, was coming home on leave from the Navy.  With only three days to put the “Dream” together, we had our work cut out for us!

Harry’s surprise “Dream” took place on Thursday, September 27th.  Not only was Harry overwhelmed, so was Mary Catherine.  She insisted on putting on a different blouse and came out looking stunning with her brilliant pink lipstick.  They were all set to go.  However, a “little birdie” had recalled that Harry used to love giving his beautiful bride red roses.  A Board Member, Carly, delivered a beautiful long-stemmed arrangement from Mulhall’s Nursery.  Before leaving for their “Dream”, the Rieber’s were delighted to spend some time visiting with Board Members, Carly and Catherine, about the many photos around their home of their lives and family.  Also accompanying the Rieber’s and Jennifer, were their daughter, Cynthia, and son-in-law, Todd.

Stepping outside, the family was greeted by Terry Campbell, their limousine driver.  Harry’s eyes lit up when he realized the limousine was for him!  He was excited to be able to experience riding in the limo and even teased that he had no intention of behaving and hoped Terry would take him on a wild ride!

Arriving at the Henry Doorly Zoo, Mary Catherine marveled at all of the changes that had taken place.  As they set off to enjoy their afternoon as a family, Carly left Harry with the hint that there was more to come and this was only the beginning of his “Dream!” 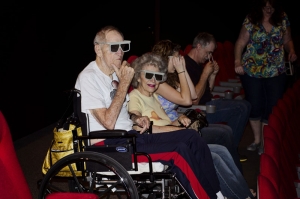 After wandering around the zoo for hours and taking in all of the sights, Harry decided that his favorite part was experiencing the aquarium and he was in awe of the penguins.  With excitement, he exclaimed, “Wow!  They sure are fast!”  Harry was also amazed by the jellyfish and enjoyed going to the Zoo’s IMAX Theatre and sporting a fancy pair of glasses for the movie!

Harry always enjoyed hunting and fishing through his life . . . taking many fishing trips to Minnesota with Mary Catherine.  But not only did Harry enjoy looking at fish at the Zoo, he also enjoys eating them.  So, next on the agenda was a trip to Shucks in downtown Omaha.  To everyone’s surprise, Harry ordered catfish sticks for appetizers and walleye for his entrée and ate all of it!  He said, “That was some of the best walleye I have ever had!”  Shuck’s manager, Bao, presented Harry with a t-shirt and made him an honorary Shuck’s member!  We were told that Harry loved strawberry-rhubarb pie, so we sent him home with one since he thought he had probably eaten enough already!

On Sundays, one of Harry’s favorite things to do is to take a drive around Lake Manawa to look for deer.  So, Terry gathered the family in the limo for a wildlife finding expedition . . . and they were successful!  They were lucky enough to see a fawn and two adult deer.  Following that, it was time for the drive home and the conclusion of their day.   Upon Harry’s arrival at home, he stated, “You know!  I think I could just live in this limo!”

There are many that The Dreamweaver Foundation would like to thank.  But the most important thank-you goes to Harry, for his service in World War II as an Air Force gunman.  Not only is this time in Harry’s life important to him, it is very important to all of us.  Thank you, Harry, for giving of your time to protect this wonderful Nation that we live in.  You are one of America’s true brave heroes!

As Elmer Davis quoted, “This nation will remain the land of the free, only so long as it is the home of the brave!”

Thank you to all those involved in making Harry and his family’s “Dream” such a wonderful day!  Thank you, Donna, for taking the time to nominate this delightful man.  Thank you, Henry Doorly Zoo, for being such a wonderful place to visit.  Thank you, Terry Campbell, for being such a caring limo driver!  You took such great care of this family!  Thank you, Bao and Shuck’s, for going above and beyond to make Harry and his family feel so special and for the truly delicious meal!  Your staff made them feel like royalty!  And, thank you to all of the Board Members for all of your hard work to make Harry’s Dream come true!