When Harold Polan was a little boy there was a large field not far from his home that would occasionally have hot air balloons landing and taking off. Whenever Harold would hear the whooshing of the fire as it filled the balloon and he would run as fast as he could to see the amazing sight. He never had the chance to go up in the balloons, but watching them planted a dream in his heart that grew throughout his entire life. 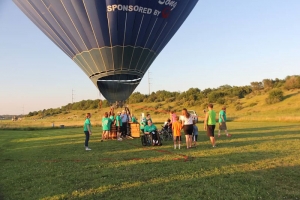 As happens to so many of us, Harold’s dream never came true. He grew up and moved away from that little home. He established a career as an accomplished woodworker and carpenter. He married, raised his family, and time and money kept him from ever taking that ride in the sky floating over the pastures and lakes from a beloved hot air balloon. At age 78 Harold’s number one bucket list item was still to go up in a hot air balloon.

The staff at Good Samaritan Society, where Harold lives, got wind of the bucket list desire and decided to contact the Dreamweaver Foundation to see if there was any way possible for Harold to fulfill his lifelong dream. At first, it seemed impossible since Harold is an amputee and bound to a wheelchair. But a little research uncovered a company in Indianola, Iowa that has a wheelchair accessible basket for people just like Harold.

From May to August plans were put in place to make the flight. The weather was challenging and rain and wind seemed to be playing against the hopes of ever launching the balloon and fulfilling Harold’s dream. However, finally, on August 11 the weather was perfect and the dream came to fruition. Harold, his daughter, and his granddaughter was able to experience the feeling of lifting off in a hot air balloon. The roaring of the fire, the heat of the flame, the power of the mighty balloon lifting higher and higher away from the ground was a breath taking experience. The view was spectacular the lake, trees, flowers, children playing soccer in the nearby field and Harold waving to all his friends from high above the ground in Serena’s Song, the handicap accessible hot air balloon.

Because of Harold’s situation, and the fact that he lives in a nursing home, when word got out that a hot air balloon ride was planned others spoke up and asked to be a part of the dream as well. Many of the residents are alone and dreams are something they have given up on long ago. When asked, there were 7 other residents who met the qualifications to receive a dream and they too were able to experience a once in a lifetime event.

It was an amazing night as wheelchairs and walkers were loaded into the balloon. Many family members participated and volunteers worked tirelessly to ensure that every person had a terrific experience. Tears of joy and tears of disbelief were shed as elderly residents and their fa