Reading romance novels, writing poetry, and watching old movies and musicals are a few of Granvernet’s favorite things. She admires the beauty of fantasy and marvels at the characters in each storyline. 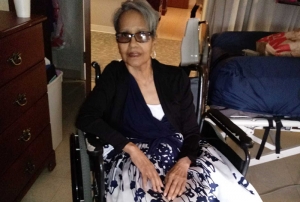 When she heard about the musical Hamilton coming to the stage in Chicago, she remembered the girl’s nights with her sisters—attending shows and performances at local theaters many years ago.

Granvernet’s symptoms of Multiple Sclerosis have been challenging her physical ability. Finding wheelchair accessible transportation and wheelchair accessible tickets seemed like an impossible task until her daughter, Dana, started searching for an organization that fulfills dreams for seniors.  Dreamweaver Foundation quickly stepped in to coordinate the logistics of recreating Granvernet’s girl’s night at the theater with her two sisters.

As Granvernet exited her home in a stunning black and white dress with Mary Jane style pumps, her carriage arrived in the form of a swanky black sedan. Seated comfortably in her wheelchair, she and her sisters felt like queens laughing and enjoying each other’s company in private transportation.

Hamilton was everything Granvernet hoped for and more. Memories of theaters and concert halls came flooding back as they were seated in the CIBC Theater that evening. After nearly 2 ½ hours of “phenomenal” singing and rapping about Alexander Hamilton’s life, Granvernet’s night had only begun.  She continued onto dinner reservations at Petterino’s, an Italian Restaurant a few blocks from the theater.

On the way home, Granvernet couldn’t stop raving about her experience.  She vowed to her sisters to attend another theater performance in the near future.  She warmly shared that the experience gave her hope. Something that Dreamweaver strives to provide for each senior.

A few days after her dream, her daughter Dana spoke with Dreamweaver Foundation.  “It was the best time she has had in years.  She hasn’t expressed that much joy in a long time.  It means a lot to hear her bubbly voice,” she shared.