George is a lover of nature. He even married his wife, Sandy, in the Rocky Mountains at Bear Lake near Estes Park, Colorado. George and Sandy loved traveling by train between Nebraska and Colorado. Not caring how late the train was, they were always excited about their next adventure in nature.

After spending 30 years as a photographer at Channel 6, George retired in 2006. Retirement didn’t slow him down! He still was an avid nature and wildlife photographer. 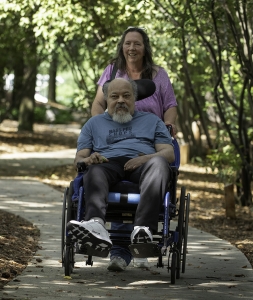 In 2014, George and Sandy celebrated their 23rd wedding anniversary. The plan was to celebrate with a vacation to Niagara Falls. Shortly after the plans were set, George suffered a stroke and his COPD worsened. They celebrated with a lovely dinner in the dining home at Florence Home. April, Social Worker at Florence Home, wanted to do something special for George and Sandy, so she contacted Dreamweaver Foundation for a little help.

George wanted to take his bride to one of their favorite places in Nebraska to have a late anniversary celebration, Lied Lodge in Nebraska City. After a couple weeks of planning, George and Sandy were off to the Lied Lodge on the most-perfect August day. As they arrived at the beautiful lodge, an old friend of George’s from Channel 6 welcomed the couple. He was there to ensure George and Sandy would remember this day for years to come through photographs.