Gene was a hard-working railroad welder for 34 years. He earned his retirement in 2000. After a couple years of relaxing, he decided he needed a new hobby. That’s when he joined a golfing league in Red Oak, IA. He quickly became obsessed with the sport. He and a bunch of other retired gentlemen would golf four times a week and go out for steaks and beer after their game. 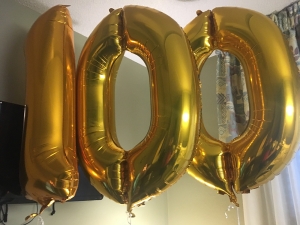 After nearly 8 years of golfing, his COPD was acting up and he had to start slowing down. When Mary from AseraCare Council Bluffs learned about Gene’s love for golf, she nominated him to fulfill a dream from Dreamweaver Foundation. Winter weather was starting to creep into Iowa, but we told Gene we would cross our fingers for a warm day to get him on the course. After 9 inches of snow in early December and a cold snap for weeks, warm weather wasn’t in the forecast. That’s when Gene decided a nice steak dinner and a beer like he would have with his buddies after a round of golf would take him back to his golfing days.

Thank you AseraCare Council Bluffs and Good Samaritan Society – Villisica for partnering with us to fulfill Gene’s Dream.