Gary left Pittsburg in 1968 as a newly graduated high school senior en route to Nebraska to wrestle at UNO and study P.E. and Business. Shortly after college, he met the love of his life, a Nebraska girl, Sharon. He took her back to Philadelphia for the first 14 years of their marriage but returned to Omaha, NE to help take care of her family for the last 27 years. Omaha is their current home, but he has never lost his Philadelphian accent! Gary is a true Philadelphian through and through. 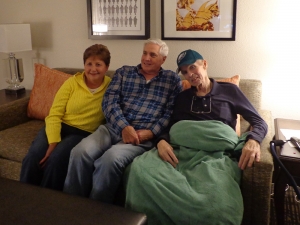 Gary and Sharon have dedicated their life to serving others. Gary’s love for restaurants started as a high school student washing dishes and eventually receiving a promotion to the fryer cooker. “I just liked it.” In college, Gary joined the Army Reserves. He was stationed at Fort Omaha as a cook. That led Gary to a lifetime career in the restaurant business. The couple managed a KFC in Omaha for a couple years before managing two Charley’s Philly Steaks in Omaha and Council Bluffs. There couldn’t have been a better fitting restaurant to reflect on Gary’s hometown roots. When the economy crashed, unfortunately, Charley’s couldn’t survive the decrease in traffic at Mall of the Bluffs in Council Bluffs. The couple decided, it was time to retire, but they didn’t rest very long. Gary started driving a school bus for Bellevue Public Schools and Sharon started a culinary job at Omaha’s Henry Doorly Zoo.

In 2017, Gary received a diagnosis that he had kidney cancer. Dr. Silberstein and his nurse, Mary, know Gary is a huge Philadelphia Eagles fan. One appointment they started talking about his favorite team and learned it has been nearly 42 years since Gary has sat in the Eagle’s stadium to watch his favorite NFL team play. Mary informed the couple about Dreamweaver Foundation’s mission. Gary and Sharon were in disbelief about the opportunity to watch the Eagles play.

Anxiously awaiting the fall season, Gary broke his hip in July. He was so disappointed, he didn’t think he would be able to travel this fall, now attending a game in 2019 seemed more reasonable. After a successful surgery and hard work during rehab, Gary had a remarkable recovery and was able to walk with the assistance of a cane. He was doing so well,
Dr. Silberstein released him to travel this fall!

On October 19, Gary and Sharon jetted off to Philadelphia! It had been nearly 20 years since he has visited the City of Brotherly Love. Driving through Philadelphia, he couldn’t believe how much had changed including the stadium. That evening, Gary reunited with his cousins. They brought him the biggest Philly Cheesesteak he has ever seen. He could barely eat one-fourth of the sandwich it was so large. The night was consumed with laughs and many years of catching up.

After receiving dialysis treatment Saturday morning, Gary rested to ensure he saved all of his energy for the big game. He was so anxious it was hard to relax. Finally, it was game day! Gary was decked out in Eagles gear. When they arrived at the stadium, they met Tori, Community Relations Coordinator for Philadelphia Eagles. She escorted the Eagles fans to the field to watch pre-game warm-up. Gary was in awe of the famous tunnel that leads the players from the locker room to Lincoln Financial Field. He has seen it on TV countless times, but it was an incredible experience setting foot in the same place as the players. After spending about an hour on the field, it was kick-off time. Fly Eagles Fly! Gary and Sharon were escorted to their spacious and comfortable seats overlooking the field. The couple was amazed by the VIP treatment they received with padded seats and so much room. The Eagles were leading the Panthers for most of the game. Heading into the 4th quarter 17 – 0, everyone was so happy, you could feel the high excitement and energy in the air. It didn’t matter how cold it was because of how well the Eagles were playing. Then, the Panthers started to make a comeback. Panthers scored 21 points in the 4th quarter, leaving the final score 21 -17 Panthers with the win. Win or lose it didn’t matter. Gary’s dream of watching his favorite team play at home was a reality.

Thank you Philadelphia Eagles, VIP Limo, Dr. Silberstein and Dream Team members, Deanna and Tiffany, for partnering with us to fulfill Gary’s Dream.