For three years, Oklahoma City has been on Gary’s mind. His passion for traveling to Oklahoma began when his Extend Family Home House Manager, Christina a.k.a. Super Woman, returned from visiting her family in Oklahoma City. Since then he has been determined to visit.

He works at Labor Solutions saving the money he earns to in hopes of traveling to OKC one day and occasionally splurging on his favorite snack Root Beer and Chester’s Cheetos popcorn. For years, Gary has managed his COPD but over the last few months, his symptoms have worsened. Cole, Residential Coordinator, heard about Dreamweaver Foundation from Gary’s Tabitha Hospice Social Work, Maggie. Finally, there was hope Gary might get to experience Oklahoma City. 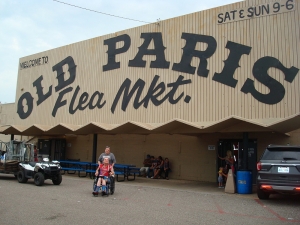 When Gary heard about the possibility of traveling to Oklahoma City he knew exactly where he wanted to go, see he has been planning the trip for three years now. The first stop would be at Old Paris Flea Market for shopping then, dinner at Mama Lou’s Restaurant. When Dreamweaver Dream Coordinator told Gary he would get his dream fulfilled, he was ready to go right then. Gary had to wait just a few weeks for details to be planned, but it wasn’t long before he was on his way to Oklahoma City with Superwoman.

He arrived at Old Paris Flea Market in awe of all the booths. He had never seen so much shopping in one place before! Gary shopped ‘til he dropped. He even wore Christina out! His favorite booth had old license plates…he was excited to bring home a few to add to his collection. He had his portrait drawn like Superman, took a photo next to a large horse and made sure to chat with everyone that crossed his path. After a full day of shopping, it was time for a nice dinner at Mama Lou’s Restaurant. Bobby, Mama Lou’s owner, welcomed and greeted Gary. Again, he was blown away by the restaurant and hospitality of Oklahoma City. After a delicious meal, Gary was ready to rest up for another day in Oklahoma City. But, not before telling Bobby he’d be back next year; Bobby replied by saying a seat will be waiting for you. It was a touching moment, especially for Christina. “Gary had a really great time”, said Christina. “I enjoyed the experience, knowing he enjoyed the trip.”

Thank you Developmental Services of Nebraska for partnering with Dreamweaver to fulfill Gary’s Dream.