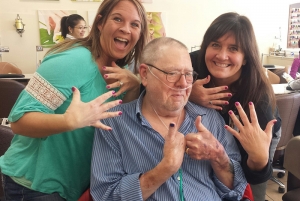 Gary checked off a box on his bucket list the other day! He has lived at Tabitha’s Harbor House in Lincoln for the last few months and often overhears the lady residents talk about getting manicures and pedicures. He asked his Tabitha Hospice Social Worker, Karen Cheesman, what it was like to get a manicure. That’s when she had the idea to nominate him to receive a dream from the Dreamweaver Foundation.

Gary was born in Alabama. His family moved a lot when he was very young because of his father’s job with the Chester Tobacco Company. They eventually settled in Lincoln, where he has lived most of his life. A semester into college at University of Nebraska at Lincoln he decided to enter the Navy. He toured Vietnam for almost four years before returning to Lincoln. 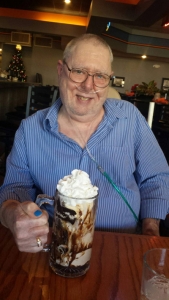 Gary was looking forward to his outing for weeks! With help from Tabitha Transportation, Gary was escorted to Tips and Toes for a manicure with Karen and his favorite Tabitha Aid, Tara. He enjoyed being pampered, even deciding to have his thumbs painted with sparkles and a mood changing polish! He couldn’t believe how soft his hands felt afterwards! Next, the three headed to Parker Smokehouse for a BBQ lunch, Gary’s favorite! He enjoyed a big lunch with an even bigger milkshake to top off the day! Karen told us, “everything worked out perfectly and we had so fun much.”

Dreamweaver Foundation would like to thank Tabitha, Tips and Toes and Parker Smokehouse for helping us fulfill Gary’s Dream.