Eugene (Louie) had three things he loved in life; his son Rocker, Music, and Skynyrd. 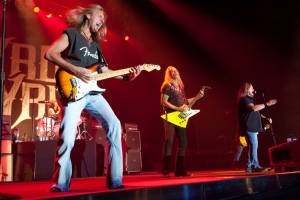 Eugene was named after his father and his grandfather, but all his life, his friends called him Louie.  Although he was born in Rhode Island, he grew up in Council Bluffs after the family relocated to Iowa for his father’s work. He attended High School at Thomas Jefferson and was well known for his rock-n-roll music.  Louie organized musicians to play at parties and local dances and spent his whole life playing in local bars and wherever he could get a gig.

Eight years ago, Louie was diagnosed with cancer and after aggressive treatment he was declared to be in remission. In March of 2015 Louie went to the doctor complaining of a flu bug that he couldn’t kick.  After tests were run it was determined that the cancer had returned.  A mass was found in the stomach area and tumors were found in the brain.  Louie underwent Gama Knife Treatment, radiation and is currently taking chemotherapy.

Louie is the single father of a little boy named Rocker.  When Louie became too ill to care for Rocker he went to live with his aunt who will eventually adopt the young boy. Louie’s caregiver, Mark Barrier, wanted desperately to fulfill an end of life dream for Louie to meet the Lynyrd Skynyrd Band.  It just so happened, that Louie’s favorite band would be playing at Rivers Edge Park in Council Bluffs during the Grassroots Music Festival. Mark contacted the Dreamweaver Foundation for help in fulfilling Louie’s dream of meeting the band and acquiring an autographed picture to leave for his son Rocker.

The Dreamweaver Foundation was able to help make this dream come true thanks to the promoter, Jason Dicks of the DOM Group, and Johnny Van Zant, lead vocalist of the Lynyrd Skynyrd Band.