Ethel and Stan of Hooper, NE, have been Husker Volleyball fans for many years.  Their love for Husker Volleyball started when their grandson, Jason, was the game photographer while he was achieving his undergrad degree at the University.  Their infatuation for the team didn’t stop when he graduated, it continued to excel just as the team started seeing success under the reins of Coach Cook. 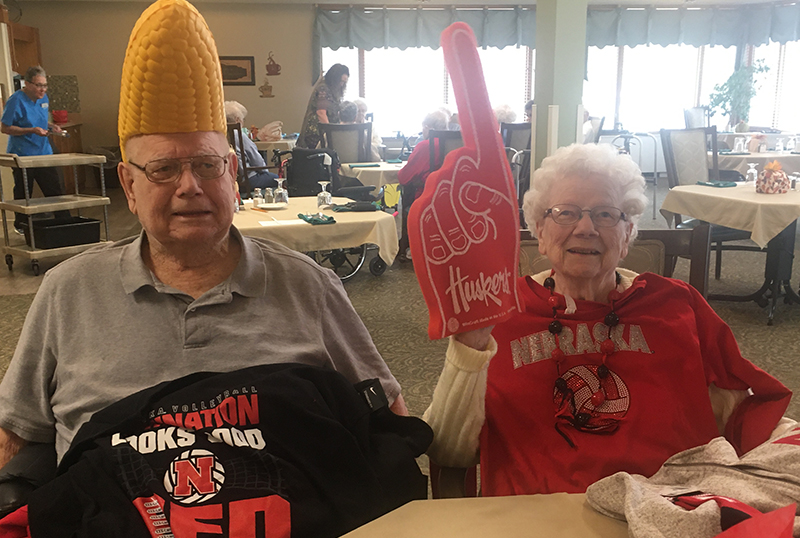 For nearly a decade, Husker Volleyball tickets have been sold out, so it was hard getting wheelchair accessible tickets for a game, but through a friend of the Foundation, the couple and their children were invited to attend a practice.

Ethel and Stan were in awe as they arrived at Bob Devaney Sports Center. The arena was so much larger than they expected.  Jill, Dream Team volunteer, captured the special moment as they entered the court.  A Husker Volleyball representative gave a special VIP tour. The group couldn’t believe how different everything looks in-person, compared to watching games on TV. Volleyball drills were filled with momentum following a big 3-2 win against the Iowa Hawkeyes.

After watching their favorite team in action, Ethel and Stan joined their guests to a “very good” prime rib dinner at Misty’s Steakhouse and Brewery.  Ethel even had a glass of beer!

It was a wonderful day of creating memories and reminiscing about all the games the couple had watched together.

Thank you to Hooper Care Center for nominating The Stuehmer’s, transporting them to Lincoln and providing care while they were away from home. Thank you to Husker Athletics for inviting the couple and their family to watch a practice and to Dream Team volunteer, Jill, for greeting the couple.