Elmer’s love of wildlife, especially birds and dogs, can be traced back to his childhood growing up in Louisiana. He grew up a happy child who loved the outdoors and nature. As he became an adult, he decided to follow in his brother’s footsteps and join the military, but unlike the rest of his family, Elmer chose the Navy instead of the Army. While serving his country, he spent time in Virginia and Italy, stationed on the USS Holder. 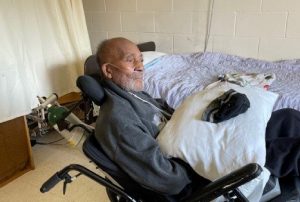 After his discharge from the Navy, Elmer took a position with Union Pacific in Omaha where he made friends with a gentleman who would eventually become his brother-in-law, and who also introduced Elmer to the love of his life, Jeannie. After a two-year courtship, Elmer and Jeannie married, and were able to spend 60 wonderful years together before her passing in 2019.

His childhood love of animals, especially birds and dogs, continued through his whole life. He was known to walk his dogs daily, with neighborhood dogs and strays following him on his journeys. He also created a spot on his front lawn to attract birds.  It was a place that he and his family and friends would sit and watch the birds, with everyone enjoying the feathered nature show. He has always had a way with animals, and rumor has it that a ground hog had even joined him once on his daily walks with his dogs!

Since coming to live full-time at Emerald Health, Elmer is no longer able to go on walks with his four-legged friends, but he could watch the feathered variety from his window. Fulfilling Elmer’s Dream of once again creating a special place to watch birds was our mission.  Elmer was very happy to receive a birdfeeder to place outside his window and bird watching accessories.  He is looking forward to having his guests sit down with him and enjoy the feathered nature show, just as he always has.

Thank you to Emerald Health, Kindred Hospice, and Elmer’s family for making this dream a reality!