It had been over 15 years since Dewey had visited the Omaha Henry Doorly Zoo. Back in the early 2000’s, the world’s second largest zoo looked much different. While still awe-inspiring with its jungle rainforest and aquarium, the zoo has made some tremendous updates and expansions to include more ecosystems and animals. And that is exactly why Dewey wanted to take the trip up from Lincoln to go! 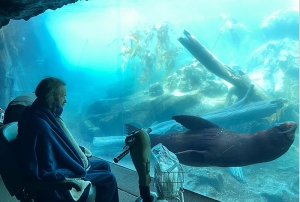 Dewey had been patiently quarantining during COVID-19 with little outside interaction. His social worker from Tabitha Hospice, Megan, nominated him to receive a Dream, because she knew a whole day spent outside would be so special for him. He was so excited to get out and see the diversity in the animals and explore the vast acreages of the zoo.

Dewey was greeted on a beautiful fall day by Dreamweaver staff Lindsay and volunteer Sarah. Two Tabitha aides accompanied him on the quick trip up from Lincoln. After getting situated on a motorized wheelchair (something he was very excited about!) the three adventurers were off for a day of exploring!

They went to see the elephants, the monkeys, the sharks, and the birds. Dewey got to see all the colors and furs and feathers of beautiful creatures. He enjoyed the calm blue waters of the aquarium and the warm humidity of the rainforest. His smile in his photos reflects the true joy he was feeling being surrounded by people who cared for him and incredible nature.

Going to the zoo after 15 years was a Dream come true for Dewey. To be outside and share this special day with other people was a wonderful way to celebrate the end of summertime.

Thank you to Beverly with Henry Doorly Zoo, Mike’s HandyVan of Lincoln, and Tabitha for making this Dream possible!