Doris has been a Kansas City Royals fan since 2014. She’s watched every game wearing Royal Blue and loved keeping track of the players and stats throughout the years. She’s watched the games on TV but has never seen them play in person.

100-year-old Doris was in for a surprise when Libby from Tabitha Hospice nominated her to receive a dream from Dreamweaver Foundation. Through a series of serendipitous and wonderful events, Libby was able to secure four Kansas City Royals tickets to their special one-time game in Omaha! 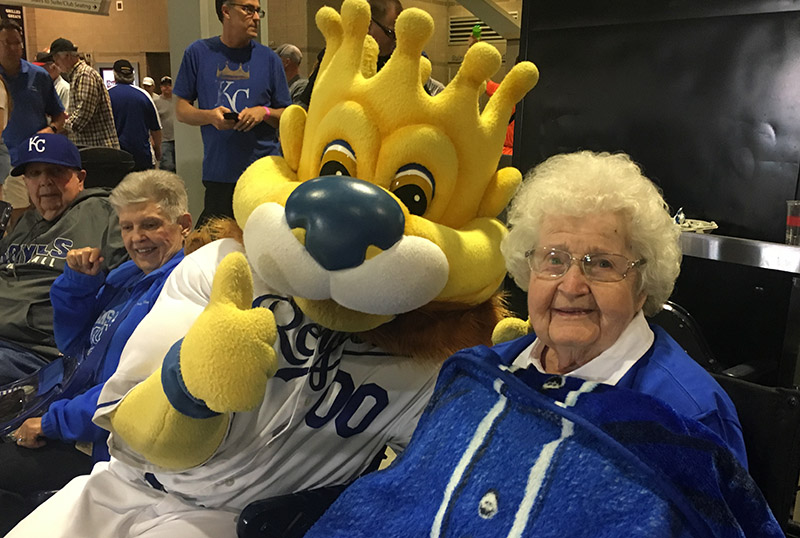 KC Royals Pitcher Homer Bailey donated his four tickets for the game. And he wrote a special note, “Make sure they’re in a comfortable spot.” Everyone was thrilled to hear of Homer’s generosity and so excited to make Doris’s Dream come true—in a very quick 48-hour planning period!

With the help of VIP Limo, the KC Royals, Omaha’s TD Ameritrade Park, and Libby from Tabitha Hospice, Doris was out the door and into the limo one hot Thursday afternoon. She and some nursing friends made the three-hour ride in comfort from Grand Island to Omaha. Her son surprised her on the way, hopping into the limo en route, and the crew in blue was ready for a night at the ballpark.

By this time, Doris had gotten some attention from the Omaha World Herald. A news story appeared about her that morning, so many people at the game that night knew who the guest of honor was. Doris was named “Fan of the Night” and was so excited to finally see her favorite team play in her home state of Nebraska. What a wonderful way to spend a summer evening!

This Dream could not have been possible without the incredible help of Libby from Tabitha Hospice, Brad Kasselder, Homer Bailey, TD Ameritrade Park, and VIP Limo. Because of you and your enthusiasm, Dreamweaver Foundation was able to fulfill the life-long Dream of a 100-year-old Royals Fan.