Don has had a difficult year.  He received the unexpected diagnosis of stomach and spleen cancer in January. In March, his wife and love of his life, passed away. Before her passing, his beautiful bride was nominated to receive an in-home spa day dream in late January.  Her day concluded with incredible photos that captured the love between her and Don. 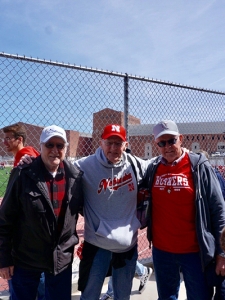 Knowing about Dreamweaver Foundation’s mission, Don started looking at opportunities where he could have a dream fulfilled as well. He didn’t know what the future held for him, but he asked if the Red and White Spring Husker Game was something he could do.  Don needed something to look forward to; something to give him hope.

On a cool 50-degree morning, VIP Limo escorted Husker Fans Don, his brother and brother-in-law to Memorial Stadium (which is the third largest city in Nebraska on game day!).  This was Don’s first time stepping into Memorial Stadium in over 30 years.  Images of a much smaller stadium rushed through his memory.  His seats in the East Stadium weren’t even a thought in the late 80s.  Don was in awe of the stadium updates and technology – he couldn’t believe he rode an elevator to access his seats!

Don and his company were amazed by the experience.  From the limo ride to VIP seats overlooking the stadium, it was truly an unforgettable, incredible experience.

Thank you to our partners – Husker Athletics for the amazing seats with an impressive view, Scheels for outfitting our fans in warm Husker apparel and VIP Limo for a sweet ride.