Don is a retired turkey farmer from Lawrence, Nebraska. Just before the pandemic started, he and his wife Dee made the difficult decision to move from the family farm to a senior housing community in Hastings, Nebraska.  Christmas in 2020, their first since leaving their hometown, was lonely and lackluster because they missed their family and traditions. Don’s daughter, Marie, knew that her dad could not bare another ho-hum holiday and nominated Don to receive a Dream trip to Omaha to visit family for the holidays. 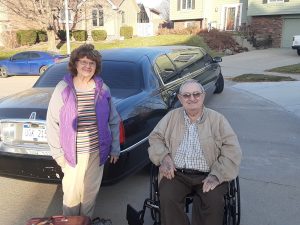 big weekend getaway!  It was no surprise that spending quality time with family was at the top of his list!  The weekend kicked off with a meal with his children and grandkids at one of his favorite restaurants, Lazlo’s in Lincoln’s Haymarket.  From there, a limo whisked Don and Dee away to Marie’s home in Omaha where they enjoyed catching up with his grandkids and meeting their new puppy, Biscuit.

After the long drive from Hastings to Omaha, the big meal out with family and some enjoyable (though tiring!) time with their energetic grandkids, Don and Dee were ready for good night of sleep!  The Kimpton Cottonwood Hotel was the perfect place for this wonderful couple to hit the hay and recharge their batteries.

The couple woke up feeling refreshed, recharged and ready to polka!  VIP Limo picked them up at their hotel and whisked them to the German American Society’s annual festival, Christmas in Germany, where they met up with family and enjoyed prime seating to watch their favorite group, The Barry Boyce Band, perform!  To their delight, Barry dedicated a song to them. The polka music and festive atmosphere energized this wonderful couple, who clapped along with the accordion and tapped their toes to the beat!  After the concert, the couple returned to the hotel to get ready for their dinner reservation at The Committee Chophouse, one of Omaha’s premier steakhouses.  Dressed to the nines, Don and Dee met Marie and her husband, Bob, for a dinner that they will never forget.  Marie was struck by the sparkle in her dad’s eye as he enjoyed his steak and shared stories about his days in the army, life on the farm, and jokes that she had never heard him tell before!

The next day, the couple enjoyed breakfast at the hotel before the long drive back to their apartment in Hastings.  On the drive home, Don commented that they will never forget their four-star weekend—and thanks to all the pictures that Marie took, Don’s Dream weekend will be immortalized for years to come.

Dreamweaver Foundation would like to thank our partner, VIP Limo, and our friends at the Kimpton Cottonwood Hotel for treating this special couple like royalty during their stay.  We would also like to extend our sincere gratitude to The Barry Boyce Band for their help with making this Dream extra memorable!