Donna has been Alan Jackson’s biggest fan since the early 1990s! Chattahoochee, Remember When, Livin’ on Love, she knows every single word!  Over the years, Donna traveled across Nebraska and Iowa to watch Alan perform at large concert arenas.  She treasures those special memories! 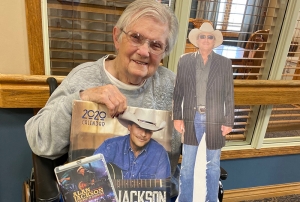 Now, at 90 years old with kidney and heart failure, traveling isn’t as easy as it once was.  Sitting on Donna’s side table is a much cherished signed photo from Alan, an outdated Alan Jackson calendar still hangs on the wall and her dancing Alan Jackson Santa Claus brings her joy all year long.

This Alan Jackson fan’s life-long dream has been to meet the CMA Entertainer of the Year. When Trisha from Heritage of Bel-Air in Norfolk learned of Donna’s Dream, she reached out to Dreamweaver Foundation for a little bit of help to make it come true.

Dreamweaver Foundation called, left messages, emailed and wrote letters in hopes of reaching Alan Jackson.  Then, COVID-19 hit.  We knew this global pandemic was going to throw a wrench in our plans.  Travel regulations, social distancing guidelines and guest restrictions limited what was possible, but it never dampened Donna’s spirits.

Months after Dreamweaver’s initial contact to Alan Jackson, much to our surprise, we received a package for Donna from Alan Jackson himself!  Enclosed in the package was a letter, signed photo, a 2020 calendar and a few DVDs of his past concerts.

Dreamweaver Foundation immediately mailed off the package to Heritage of Bel-Air for a grand surprise.  Trisha planned a special presentation to reveal the gift.  Trisha shared, “Donna was over the moon excited.” Donna told her, “He can put his boots under my bed any time!”

With her updated calendar hanging on the wall, her collection of Alan Jackson photos on her side table and the concert DVDs playing on repeat, Donna is enjoying reminiscing about her experiences and memories of Alan Jackson.